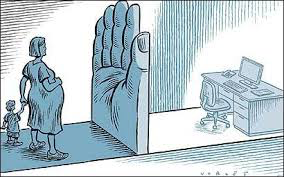 People tell me that in 2016 I can have the best of both worlds: an education, equal and successful employment, and children but in the United States there is still discrimination against both female and male child caretakers and pregnant women in the workplace. Women deserve the right to go on maternity leave and have access to child care for their young children. They shouldn't be axed from their source of income because they are seen as liability to their employer. Minnesota needs to have more legislation that protects women and all child care takers in the workplace, particularly around maternity leave and raising young children.

Over 30 years ago the Pregnancy Discrimination Act was passed in the United States. This was designed to help stop the prevalent bigotry towards pregnant women and all workers with caregiving responsibilities; however, injustice towards pregnancy in the workplace is still a considerable problem according to the U.S Equal Employment Opportunity Commision. One of the many women who have experienced stubbornness from her employer was Heather Myer. According to an article written by NPR on April 17th of 2014, Heather had gotten a doctor's note that she should keep a bottle of water at her workstation, but when she presented the note to her supervisor they denied her from having the water bottle because they had the “water fountains available for her”. Myers got a second doctor’s note, but it was not only rejected it was also scrutinized. When Heather decided again to listen to her doctor and body, she kept a water bottle and she was fired. In Minnesota we need to make it priority to stop this type of discrimination from happening. If we create new laws that make it illegal to deny a pregnant woman's doctor’s note, it can allow women to work safely while still getting their daily work accomplished.

According to the U.S Equal Employment Opportunity Commision, women in two thirds of families are the primary or co-primary earners. When a family or single mother lose some, if not all, of their current income it can cause large financial strain on the growing family. The earnings of women are becoming increasingly important and influential to a family's economic status, but even when women don’t lose their job completely there is still a “motherhood wage penalty.” An article by Time Magazine reports that there can be up to a 5% deduction from a woman's wage per child. This also plays a role in the pay gap between men and women in the workplace. The article goes on the explain that the pay gap American women observe may in part be due to this “motherhood wage penalty”. The country needs to continue and increase efforts to close the current pay gap because women need to be able to provide for their families. It needs to be pressed on employers that men and women will be payed the same for doing equal amounts of work.

Pregnancy was apart of literally every ones life and is not a rare occurrence. Pregnant women need to have more legislation that provides accommodations to their specific situation. These new laws or policies can not only halt discrimination towards women and caregivers in the workplace, but can also help close that pay gap, and single mothers and large families alike have more stable economic situations while raising their children. I am not sure that I believe I would not be able both raise children and be treated like an equal in the workplace, but with your help I have faith that by the time I am an adult I will have the opportunity to have children and a successful career.

wage gap women's rights pregnancy maternity leave equality
Published on Oct 18, 2016
Report a problem... When should you flag content? If the user is making personal attacks, using profanity or harassing someone, please flag this content as inappropriate. We encourage different opinions, respectfully presented, as an exercise in free speech.
Benilde-St. Margaret's School

The media can to easily damage our society so we need to find a way to prevent them from relating anymore destruction.

Immigration Should Be Legal

Dear Future President: The topic of Immigration has bee...

Men generally get paid more money than women do for the same job. This should change.