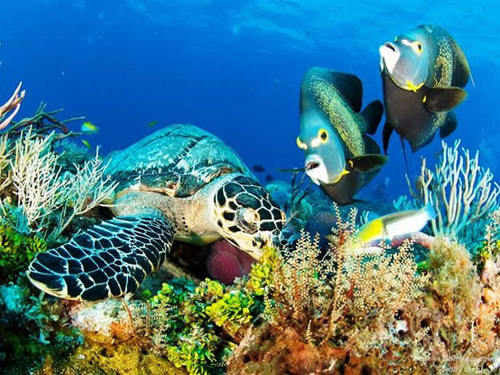 Global warming is the the increasing temperatures due to greenhouse gases, such as carbon dioxide that is released from cars into the atmosphere. As global warming heats up the Earth, this kills the coral in the reef. The warm water “bleaches” the coral, meaning the coral dies from the heat. From Newsd, they state that “the coral deaths followed intense coral bleaching, which was caused by global warming and influenced by the whims of the weather.” As of now, almost a quarter of the oral in the reef is dead. This affects not only the plants, but the animal life as well. Also from Newsd, they stated that the coral “...cooked over a period of just a week or two because the temperatures in the northern Barrier Reef were so extreme.” With the coral dying so fast this means the animals will also die out. From the Great Barrier Reef Marine Park Authority, it states that some of the animals in the Great Barrier Reef “...have been around since prehistoric times and have changed little over the millennia.” By letting the Great Barrier Reef die, we are also killing these animals that have been on Earth longer than we have.

Even with all this drastic information, there are still those who do not believe in global warming. Some believe that there is no proof that global warming is created by humans, and even that it does not exist at all. However, considering the rising temperatures ever since the industrial revolution, which began the dumping of pollutants into the air, humans seem a likely cause for rising temperatures. By ignoring these signs this allows for ignorance of the health our world, that will later affect humans in an even greater way.

A way to help solve global warming issues, especially the issue of the Great Barrier Reef, is to inform people. By telling others of this situation, it allows for more people to help and eventually create a movement to save the reef. By informing world leaders, we could all come together and figure out ways to slow global warming, and maybe even stop it. As a child, the world fascinated me and now I have a chance to help and I want do everything I can to protect our home.

global warming environment
Published on Nov 3, 2016
Report a problem... When should you flag content? If the user is making personal attacks, using profanity or harassing someone, please flag this content as inappropriate. We encourage different opinions, respectfully presented, as an exercise in free speech.
Newbury Park High School

There are pros and cons to allowing women to have abortions.

State laws that mandate teaching negative information about sexuality and gender orientations within sex education should be abolished for the safe...

Nuclear weapons are to dangerous and it is affecting peope