Most of the children and young adults in our civilization look up to their parents as figure heads because of this there is less room for change. Little girls look up to their mother and usually end up becoming influenced by their mothers path. This is human nature, people see someone they love and admire (usually someone close to them like a parent) then they mimic that person with intentions to learn from them. There is nothing wrong with the traits that we still poses from our ancient ancestors. However it does not allow room for change or difference.

Most little girls look up to their mom and see her as one of the greatest women alive. Whatever their mother does is perfect and the right decision. This is also not a bad thing however if her mother had a low ranking job of not much importance, then the little girl would think that the job that her mother holds is the best job a woman could possibly have. This thought process that most people have makes little girls settle for opportunities so much less than what they could achieve.

Woman hold 24 out of 500 job spots for CEO’s of large companies. That's 4.8%! Although an increase from previous years, it's not quite the number someone would have expected it to be in the year 2016. Most people would expect it to be just about even by now (50-50 both ways). It should not matter your gender when people are looking to hire up for jobs.

Women having equality of job will then lead to women being payed and treated equally. This is not the 1950's, sexism should no be a thing. As president I believe you should help change this by making people have equal respect for women as men. There should be no difference.

The the attached file includes an article expressing how important this subject is:

The previous president (Mr. Barack Obama) said words that I still remember today as one of my favorite quotes. His words were, "Empowering women isn't just the right thing to do- it's the smart thing too." Please help little girls grow up to become strong women who can be successful in life. Please make a change and help young women and teens get themselves out of the sterio type that women can't do as much as men. They can, and they should be treated that way. Everyone should. 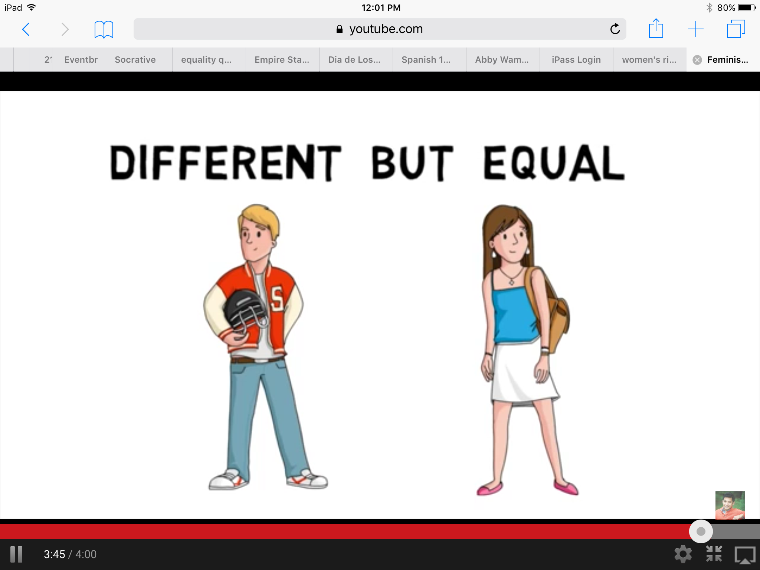 women empowerment equal pay equality fair women's rights
Published on Nov 3, 2016
Report a problem... When should you flag content? If the user is making personal attacks, using profanity or harassing someone, please flag this content as inappropriate. We encourage different opinions, respectfully presented, as an exercise in free speech.
Nipmuc High School

The Attack on ISIS.

ISIS has destroyed, looted, and pillaged countless ancient monuments that have been standing since thousands of years ago.

Undocumented Immigrants in the U.S.A.