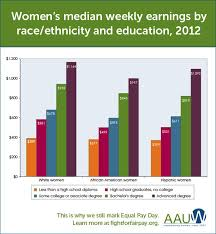 I am a part of the future and I feel as though my opinion should be valued as much as yours. As you know, today's children are tomorrow's doctors, dentists, scientists, mothers, fathers, teachers, etc. When children grow up and we find ourselves working hard to make good money in these jobs, we will only want to work harder. But what if working harder didn’t do any good for of us? Notice how I only some of us. Today, white men get paid 100% of what is supposed to be paid, but white woman, black woman, black men, and other races don’t. Imagine this: a woman and a man work at the same job. Both of them have the same boss and do the same exact thing. The man gets paid more. He still gets paid more, even if the woman works harder. What is really sad about this is that there was no law actually passed preventing this from happening.

It has always been like this. Until June 4th, 1919, women weren’t allowed to vote. It has always been assumed that women are the stay at home moms who cook and clean. I understand that. It is a stereotype, though. Not all women know how to cook well. Not all women enjoy cleaning. Back before the 1970s, women weren’t even allowed to get a credit card! It is a stereotype that needs to be broken.

According to the National Women's Law Center, “The wage gap typically translates into more than $10,000 per year lost in earnings for women.” $10,000 dollars can definitely pay off a single woman’s rent. What makes women different from men in these working industries? Believe it or not, studies show that women can work harder than men. An experiment was done with men and women. They were put in the same room and the women worked for a longer period of time than men. When there was an opportunity given to walk away, “Thirty-eight percent of female workers walked away compared to 52 percent of male workers.” If the men slack off on work and only get paid more, that is not going to make a woman want to work any harder. In the end, you are just going to have everybody slacking off , and the men get paid more no matter what they do.

Everybody says that America is a free, equal country. Is that really true? Of course, we are free, but are we really equal? According to www. ourdocuments.gov , “Despite Kennedy’s assassination in November of 1963, his proposal culminated in the civil rights act of 1964, signed into law by president Lyndon Johnson just a few hours after House approval on July 2nd, 1964. The act outlawed segregation in businesses.” Not having equal pay between genders/races definitely sound like discrimination to me. It's racist and sexist. That is the harsh truth. Also, according to www.nps.gov “The Civil Rights Act of 1964 is the nation's premier civil rights legislation. The act outlawed discrimination on the basis of color, race, religion sex, or national origin.”

Not only is it white women that aren’t getting paid equally, it is also black men, black women, Hispanic men, Hispanic women, etc. According to infoplease.com, in 2013, Hispanic men got paid 67.2% of what white men did. 75.1% of black men, 64% for black women, and 54% for Hispanic women. What makes the pigment of the skin on a human being determine equal pay? Right off of the top of my head the only differences that I can think of are that women and men are built differently and that they usually have different interests. I do not want to be adding the different pay wages to that list. Also, according to http://money.cnn.com/2016/09/20/news/economy/black-white-wage-gap/, “Last year, the hourly pay gap between blacks and whites widened to 26.7%, with whites making an average of $25.22 an hour compared to $18.49 for blacks, the EPI found.” We Americans have been preaching about how segregation and racism is all gone but it clearly isn’t.

Women get paid 78 cents for every dollar paid to men. And for other races, it is even less than 78 cents. I do not understand, and I will never personally be able to wrap my head around the fact that men and women were all created equally, but get paid unequally. With women and minorities making up the majority of the workforce, equal pay should be a right, not a privilege.

Benson, Katie. “The Importance of Race When Discussing the Wage Gap.”AAUW: Empowering Women Since 1881, 9 Apr. 2013, http://www.aauw.org/article/what-does-race-have-to-do-with-a-womans-salary-a-lot/.

equality wage gap
Published on Oct 5, 2016
Report a problem... When should you flag content? If the user is making personal attacks, using profanity or harassing someone, please flag this content as inappropriate. We encourage different opinions, respectfully presented, as an exercise in free speech.
Weddington Middle

Illegal Immigration is a problem in America.

People aren't being treated equally because of their race, religion,or sexuality.

Equality is a huge problem that needs to be solved!!