Hello Mr/Mrs. President my name is Coleman Nee, I am a high school student in Nipmuc High School. Congladulations on becoming the new president of the United States of America, I hope that you will make good choices and make America a great country. I think that the college prices are to high for people to pay. One of the things you can do to help the U.S is bring college prices down and allow more people to get a better education. 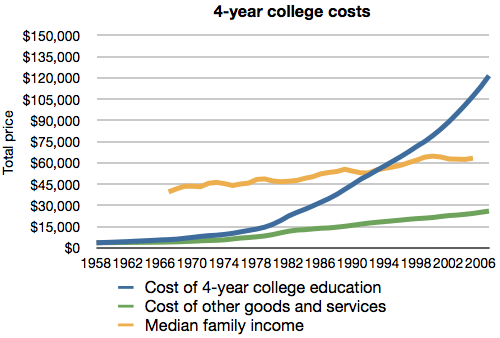 Right now public two year colleges can cost up to $11,000 a year which would be $22,000 for the two years. In four year colleges the price for one year could be from $19,000-$32,000 and it is rising, which is way more money than most college students have access to, four years of college can cost more than $128,000. This is the price just for the school, excluding a place to stay and food to eat which would just add to the cost each year. The only way students would get this money is from loans or scholarships or from their parents because very few students have $128,000 or more saved. Since most students turn to loans when they are going to college the U.S. is over 1.2 trillion dollars and more loans are made everyday and they get harder and harder to pay back the longer a person waits. School Scholorships are good way to pay less for college but not every student is able to get scholarships, and if a student does get a scholarship they would still have to pay a huge part of the cost of the college. Sometimes a persons parents can help with college costs but if you are in a large family or are the youngest in a family they can't always afford to send you to a college because the prices are way to high to pay for even one person, so imagine paying double that if you pay for two children, it's way to much money. I think that if college prices are brought down that many more people will want to go to college, and there would be many more educated people in the country. Thank you Mr/Mrs. President for taking the time to read my letter.

Education Costs college
Published on Nov 3, 2016
Report a problem... When should you flag content? If the user is making personal attacks, using profanity or harassing someone, please flag this content as inappropriate. We encourage different opinions, respectfully presented, as an exercise in free speech.
Nipmuc High School

Schools Put Too Much Pressure on the Students

Schools all across the U.S.A give students way too much homework and pressure them to succeed. Eventually students just do homework to get it over ...

Transgender citizens should be able to use the bathroom without fear of discrimination.

The United States is having too many terrorist attacks, and we need to stop them.

Increasing college tuition is preventing students from getting higher levels of education.

College needs to be be cheaper in the USA because it will benefit us in the long run.

Offering free college tuition would put us spiraling into debt, cause a major raise in taxes, reduce value and quality of education, as well as mak...