I would like you to count to six . . . . . . I bet you will like to know why I asked you that ? In my research about world hunger, I found that every six seconds a KID DIES FROM HUNGER AND RELATED CAUSES. To me that is absolutely heartbreaking. Although hunger is more of a problem in other countries like Haiti, it still is a big issue in the United States, the same country that you are the President of. What kind of message do you think you are sending to your voters by not dealing with this severe problem? I would not appreciate growing up in an upside down world where people are dying from hunger and will give an arm and a leg for FOOD that is not nutritious but like a little bread or rice. I strongly believe that it is downright preposterous that those babies, kids, and hard-working dads, and moms who suffer from a lack of food, worst of all see their own flesh and blood, their kids, suffer. To them there is no such thing as a little snack. Their little snack is what little they can scrape together for one meal.

The definition of hunger is the want or scarcity of food in a country. I believe that the definition of hunger should soon be erased from the dictionary because we will not have any more hunger in our world. One of the main reasons that I am writing to you about this is that it is affecting people all around the planet. One billion of the people around the world are chronically hungry. Of those one billion people, 25,000 children die every day of hunger and diseases resulting from hunger. Under nourishment can also have a severe reaction on the human body and health.

In conclusion I believe that if you don't think it is a severe issue in our country, you could at least make a yearly fundraiser to help people in the poorest communities that have little clean drinking water and little food. 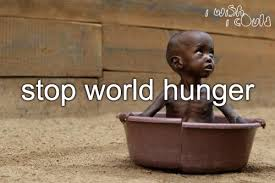 world hunger
Published on Oct 18, 2016
Report a problem... When should you flag content? If the user is making personal attacks, using profanity or harassing someone, please flag this content as inappropriate. We encourage different opinions, respectfully presented, as an exercise in free speech.
Keith Valley Middle School

Do you think world peace is important? I think it is very important, for everyone's safety.

Since the days of the early settlers in the United States, firearms have been part of the American tradition as protection and a means of hunting o...

There are so many people in the world that are starving and do not get enough to eat everyday. But there is something everyone can do to help this ...

This will be about how many of the U.S. kids are hungry and how they are being affected.

Millions of people are being harmed because of world hunger.

The issue in my letter is about World Hunger.