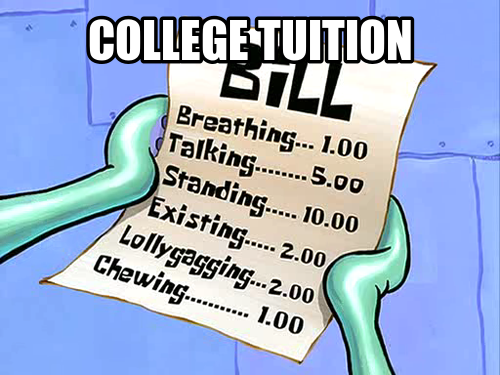 “Education should be a right, not a privilege.” Senator Bernie Sanders

Congratulations on becoming the next president of the United States! It's a huge honor, as it is one of the highest a person could have. You made it.

College tuition has proven a huge issue among young people. There is no debate that everyone who wants to learn should learn. College is optional, which makes it ridiculous that people who want to go to college struggle with student loans. It is said that college is the best experience of your lifetime. Instead, it ends up being a living hell for millennials. Though I excercize these beliefs, that doesn't mean I fully agree with Bernie Sanders and Hillary Clinton's plan. They are suggesting free community college tuition. Though I agree that this is present in a multitude of other countries and should be in the United States, this is a drastic change in the economy. It is one thing to make college affordable, it's another to make challenging courses that teachers work hard on free.

“A college education is now the second-largest expense an individual is likely to make in a lifetime.” Huffington Post

Student loans are huge weight on the economy itself. Student loan debt is the 2nd highest form of debt in the United States. The first is mortgages. So that 19.5 trillion dollars in US debt that those candidates keep ranting about? Well, a good amount of it comes from student loans.

Education Costs
Published on Nov 3, 2016
Report a problem... When should you flag content? If the user is making personal attacks, using profanity or harassing someone, please flag this content as inappropriate. We encourage different opinions, respectfully presented, as an exercise in free speech.
Nipmuc High School

Why All Political Parties Need to Work Together More

Why Democrats and Republicans Need to Work Together Dear Next President: In the following letter, I will provide extensive reasoning will be for ...

Why students higher education so dependent on cost

Why College Tuition Is Ruining Young Adults In America

College tuition is a huge issue in America and something needs to be done about it.

This letter explains the huge problem of student debt and how it can be prevented for future generations.

College Costs Too Much

The number one reason high school graduates do not bother to think about the idea of going to college is the fact that the costs of college are too...