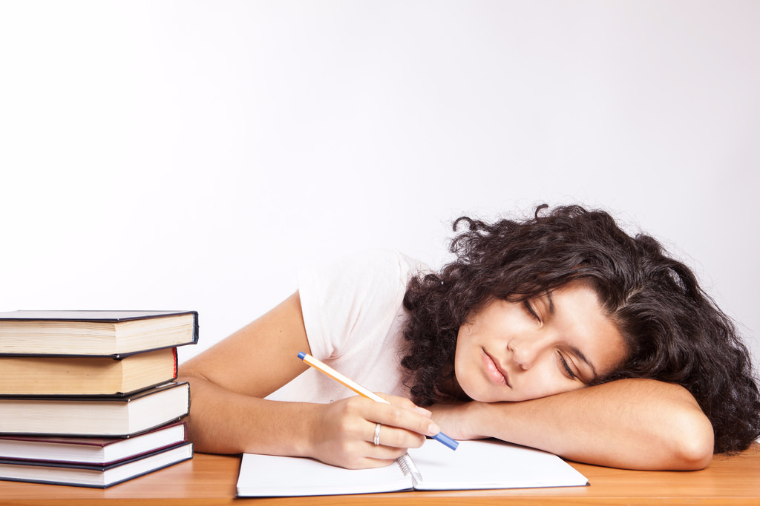 Imagine being a part of the 28% of students falling asleep during class. You wouldn’t be learning a bit of information, nor would you be improving your grade. High School starting times can be as early as 7 A.M. in the United States. For some students, including me, this is a problem. Although there are many reasons school starting times are incredibly early, it is not improving education. Instead, it is worsening it.

Many high school students are suffering because school starts too early. They find themselves too tired to concentrate and possibly ending up asleep. Teenager’s sleep schedules are different from when they were a kid and much different than adults. Their body’s are set to fall asleep at 11:00 P.M. and wake up around 8:00 or 9:00 A.M. With school starting so early, it is hard for teenagers to wake up and do well in their first period classes when they should be asleep at that time. I believe that this is a crucial issue that needs to be fixed, so high schoolers can live their days awake and focus on achieving outstanding grades.

The main effects of early start times on students is that they are receiving bad grades and test scores. Nancy Kalish from the New York Times notes that, “In 2002, high schools in Jessamine County in Kentucky pushed back the first bell to 8:40 a.m., from 7:30 a.m. Attendance immediately went up, as did scores on standardized tests, which have continued to rise each year.” This means that pushing back school start times will indeed help improve test scores. Kalish also highlights schools from Virginia, Minnesota, and Connecticut that are having similar results when pushing their school start times back. These results matter because schools in other states need to consider pushing school start times back too. My claim along with the evidence shown helps convince people that test score will improve when school starting times are set later.

A second effect on students when they are forced to go to school so early is that they get very stressed out. With many students participating in after-school sports or working part-time jobs, it leaves no time for students to finish up their homework for the next day of school. Many students get stressed with the high amount of pressure on them to do well in school, while juggling other things going on in their everyday lives. Also, there is the problem with going to bed on time. In order for high school student to get the recommended eight to nine hours of sleep per night, they need to go to bed around 9:00 P.M. Again, this is nearly impossible for students with after-school activities or jobs. If school didn’t start until 10:00 a.m., teenagers would have plenty of time to finish homework while still getting the amount of sleep they need so they can live healthier and happier.

So what’s keeping school’s around the U.S. from pushing the starting times back? There are some negative drawbacks to a later start time in schools. According to an article published in Psychology Today by John Cline, Ph.D., “A late start may cause conflicts with parents’ work schedules, which may cause transportation or supervision issues.’’ Most all of adult jobs in the U.S. start early in the morning. This can be inconvenient for parents because they usually drop their kids off on their way to work. Although this a issue, it can be solved. Flipping the high school and elementary school start times will leave no problems for bus drivers. Students that normally go to school with their parents can just ride the bus. This solution won’t affect elementary school kids either because they don't have as much homework, don’t participate in as many after school sports, and don’t have jobs to attend to after school. They can easily go to bed and wake up earlier.

In conclusion, the effect of an early start time is continuing to cause problems. High school students have difficulty keeping their grades up and everyone seems to be falling asleep. That 28% of students falling asleep will keep rising if we don't fix this issue. No one wants this for our students. I personally have experienced issues with this problem which was what motivated me to write about this topic. I am constantly pressing the snooze button on my alarm because I dread going to my first period class. I can never focus until third or fourth period. If school started later, the miserable day ahead of me would turn into a much more focused and happier day for me. I hope this letter showed the importance of the problem of early school starting times as well as some solutions to fix it. Will you consider looking further into this issue and fix it Future President?

school start times
Published on Nov 4, 2016
Report a problem... When should you flag content? If the user is making personal attacks, using profanity or harassing someone, please flag this content as inappropriate. We encourage different opinions, respectfully presented, as an exercise in free speech.
East Junior High

My paper covers how lax gun control affects the U.S. in negative ways and how we can take steps to fix them.