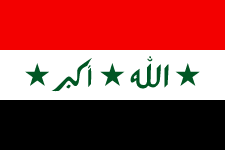 ISIS is a growing disease and it has to stop. ISIS has harmed thousands of people and will keep on going. We have to change our way of handling this or a lot more people are going to die. After ISIS was revealed to the world people all over took action including America but we can do more than we have.

In Iraq we trained Iraqis to counter weight the government. What we did not know is that they later on became the world wide known terrorist group ISIS. We also supplied them with weapons and equipment that now they started using against us. The Newswire states that “members of the Central Intelligence Agency took part in training the Syrians.” Yes ISIS was trained by the US but only because the US was trying to help.

We are participating in trying to stop ISIS but it's not as effective as we want it to be. Military Times says “the terrain is pocked with trenches, fighting positions, razor wire and armed checkpoints.” It says we have checkpoints on roads to stop or scare off any ISIS terrorist. It might be scaring them off but is it progressive? We need to at least move into ISIS territory or near with fully equipped checkpoints that will help and take over territories occupied by ISIS.

The way we have been handling ISIS hasn't been working if it was we would have found the leaders or someone who knows. Frontline Paper says “Who these men are remains mostly a mystery. The Soufan Group, a security intelligence firm, has been tracking information from ISIS publications, information from defectors and others to piece together the clearest possible picture of the top leaders in ISIS. FRONTLINE collaborated with them to create this graphic, showing what’s known about where they’re from and what role they play in their newly established caliphate.” It means we don't know exactly who the leaders are but If we pushed into ISIS camps or territories we could find out names or their tactics in war or even what their next plan is.

Yes it is a risky job to put soldiers in the enemy territory and can be extremely scary for the soldiers. The Foreign Policy website says “Islamic State has inspired or carried out the killing of civilians in 11 countries, not counting the group’s attacks in its strongholds of Iraq, Syria, Libya, Afghanistan, and Yemen.”. Think of a 7 year old in Syria that 7 year old would be taught to kill or be killed. Is that the influence you would want on your own child. If we don’t at least try to push back ISIS territories then more people will die and then ISIS would be more frightening and then people will join and they become bigger. Like I said ISIS is getting bigger and the more we wait the bigger they get.

Before we do anything we can start with their beliefs. The Atlantic Paper says “The Islamic State, also known as the Islamic State of Iraq and al-Sham (isis), follows a distinctive variety of Islam whose beliefs about the path to the Day of Judgment matter to its strategy, and can help the West know its enemy and predict its behavior.” Since we know their belief it can help with knowing their tactics and when and what they tend on doing. Maybe not exactly what they are doing but it can give us a guide. ISIS is very unpredictable and knowing this could possibly help predict what they do.

Overall ISIS is a very dangerous and serious group and even a one percent chance of an attack it has to be taken as an absolute. They are unpredictable and very willing to take their attacks to an extent. ISIS is a growing disease and if they keep on growing it could impact the world so they must be exterminated.

military isis
Published on Nov 4, 2016
Report a problem... When should you flag content? If the user is making personal attacks, using profanity or harassing someone, please flag this content as inappropriate. We encourage different opinions, respectfully presented, as an exercise in free speech.
East Junior High

ISIS is a problem

This letter is directed to the next President of the United States in reference to the Islamic State (ISIS), and how our next president is going to...

Defeat terrorist cells across the world instead of allowing them to come to our land and kill civilians.