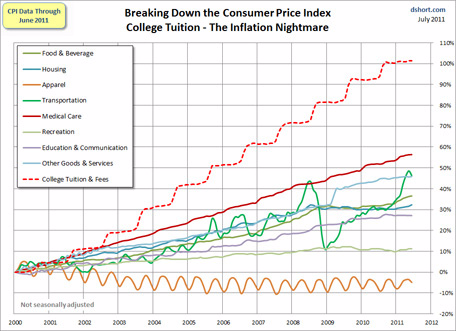 First imagine finishing your senior year and graduating high school. Next imagine having worked incredibly hard to achieve good grades and finally seeing them pay off by being accepted into your choice of college. Lastly, imagine your parents telling you the heart wrenching news that they can’t pay for you to go to college. According to Think Adviser, 63% of people say they can’t afford college. College rates have increased dramatically over the last ten years; as a result, less students can afford to receive a college education. This trend needs to be reversed.

Attending and graduating college is the first step in achieving the American dream. The definition of the American dream ,according to Google, is “the ideal that every US citizen should have an equal opportunity to achieve success and prosperity through hard work, determination, and initiative.” In the United States, this is a lie. According to Ben Casselman in the article “Higher Education” from Five Thirty Eight, he points out “...about 40 percent of whites between the ages of 25 and 29 had a bachelor's degree or more, compared to about 20 percent of blacks, 15 percent of Hispanics and 58 percent of Asians, according to data from the Current Population Survey.” This means that a large portion of our population is without a college education. This matters because on our quest to become the most educated nation, 70% of people haven’t received their college diploma. Also, according to Janel Davis in the article “Educational Levels Generally Make A Difference In Earnings” from Politifact, she quotes Don Lemon stating, “ … a high school dropout makes on average $19,000 a year, a high school graduate makes $28,000 a year, a college graduate makes $51,000 a year. Over the course of a career, a college grad will make nearly $1 million more than a high school graduate. That's a lot of money." This sets people who can’t afford to go college way behind for their later lives. This is a significant disadvantage, not based on merit, but primarily based on the resources they were born into. When people envision the United States, they imagine a country where all people have equal opportunity. Unfortunately, this is is an illusion.

Colleges obviously need to be able to cover their costs. In the article “Where Does All That Money Go” by Kunal Jasty from Radio Open Source, it shows on a graph that public colleges spend 27% of their money on instruction, 12% on research, 11% on hospital services, and 9% on auxiliary enterprises. Colleges only spend 7% of their total income on academic support. According to the Lumina Foundation and College Board, the average college spends 12,000 dollars per student, while they make approximately 22,000 dollars per student. This means that they make around 10,000 dollars per student. For example, Stanford University has 16,770 students. This means that they would take in 167 million dollars just from tuition, excluding sales from athletics and money from donations. This also shows that the tuition rates can be reduced.

When growing up, people envision being able to have a good paying job and being able to provide for themselves. College is the first step in that direction. Unless tuition is decreased though, not everyone can have the opportunity to complete their dream. I hope I have made my point clear. Thank you, Mr. or Mrs. President.

high school graduates Education Costs financial aid
Published on Nov 4, 2016
Report a problem... When should you flag content? If the user is making personal attacks, using profanity or harassing someone, please flag this content as inappropriate. We encourage different opinions, respectfully presented, as an exercise in free speech.
East Junior High

Evidence and reasons of why the president should lower college tuition and debt.

The price of college tuition compared to the average income is insane to see and needs to be changed.

How college tuition effects students and taxpayers, and potential ways in which to solve the problem.