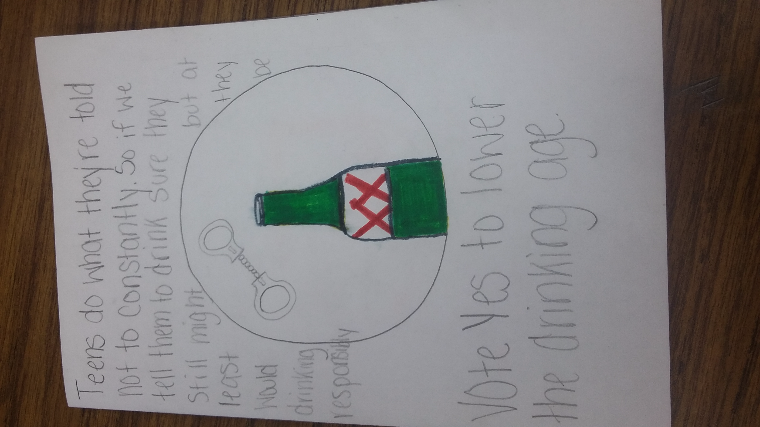 Over the last few decades our teenage generations have developed a binge drinking culture leading to conversations about how to eliminate the issues that come about when teenagers get too drunk. It breaks my heart to see another teen who is getting in the hospital getting their stomach pumped or lowering their best friend into their grave. The drinking age needs to be lowered because lowering the drinking age will stimulate the economy, reduce crime rates, and protect teens.

Firstly, Lowering the drinking age will stimulate the economy. The current manufacturing of beer thrives in the economy, according to Economic Contributions of the Distilled Spirits Industry: “¨The U.S. beverage alcohol industry is a major contributor to the economy, responsible for over $400 billion in total U.S. economic activity in 2010, generating nearly $90 billion in wages and over 3.9 million jobs for U.S. workers.¨. If we lower the drinking age down to 18 then alcohol companies will make more money which in turn stimulates the economy and since they will be producing more more jobs can be made to also help the economy

Secondly, lowering the drinking age will reduce crime rate (illegal Ids, Duis, public intoxication). Teenagers as it is drink in a dangerous environment and procure alcohol in dangerous ways. In the article it stated ¨the 21-and-over drinking laws have actually made for a more dangerous environment for American teenagers by prompting them to do their drinking in private, unsupervised environments. Those environments have created an irresponsible, drink-to-get-drunk youth culture in the U.S.¨ (Minimum Drinking Age). If we lower the drinking age then teenagers will be able to safely procure and consume alcohol under public supervision and over time hopefully teenagers will adapt to a responsible drinking culture rather than the current binge drinking culture. Doing so drunk driving deaths and DUI’s will reduce because teens will be drinking more responsibly and around others who hopefully won't let them get so drunk they cannot function right in order to get home safely.

Thirdly, lowering the drinking age will protect teens from the harmful effects of binge drinking. According to The National Institute of Alcohol Abuse and Alcoholism twelve through twenty year olds consume eleven percent of the total amount of alcohol consumed in our country. Teens do drink less than adults however, when teens drink they drink more. Studies show that 90 percent of the alcohol teens consume is consumed in the act of binge drinking. Fourteen percent of teens use alcohol more than they you illegal marijuana. Overall teenagers use alcohol more than cigarettes or marijuana. (Underage Drinking) If the US was to legalize a new drinking age of eighteen then americans ages 18-22 could drink more responsibly and safer. Doing this would reduce the binge drinking culture they have developed now.

Some may say that anyone under the age of 21 does not need to be able to consume alcohol because they are irresponsible and do not know when to stop. Although that is understandable we have so many rights at age of 18 that come with a ton of responsibility as well with if it's out in the open they are more likely to do it responsibly and rather do so responsibly.

As the president you could gradually lower the drinking age one year at a time for the next three years until the capping off age at 18, as Britain did, ¨Any Briton aged five and up can drink alcohol with parental consent. At the age of 16, one can order wine or beer in a restaurant or pub to accompany a meal, but only if accompanied by a parent or guardian. By 18, all Britons are allowed to purchase and consume alcohol on their own, in any setting.¨ as for in America you have to be 21 to buy alcohol, 18 to sell it, and can only consume i under the age of 18 in your parent's presence.

When I was 7 years old my cousin was involved in a drunk driving accident in Sedamsville. He got so drunk and he was only 19. He wrapped his truck around a building but no one batted an eye. ¨Another teen drinking until he's too drunk to remember his name´ My family was ridiculed by people saying we were too lenient and it's our fault. He would probably still be alive if he was able to go sit in a responsible drinking environment instead of in the back room of his friends house who was to drunk to tell him not to drink and drive. I want to peacefully fight for the drinking age to be lowered so other families that have teens can be possibly saved from the pain of this. I believe the drinking age needs to be lowered to avoid accidents like this from happening because they happen way too often in my small town much less the entire country. I believe this change will save the lives of many young citizens and will help boost the economy along with lowing criminal rates. I believe more people need to be aware of how most teens will do what they're told not to rather than what they are told to do.

Thank you for taking the time to read my letter, I hope you consider my proposal.

crimes protecting the us drinking drinking and driving youth
Published on Nov 9, 2016
Report a problem... When should you flag content? If the user is making personal attacks, using profanity or harassing someone, please flag this content as inappropriate. We encourage different opinions, respectfully presented, as an exercise in free speech.
Oak Hills High School

Everyone should live and stay in the U.S. if they choose to do so.

Abortion must change because it takes aways babies basic rights like life, liberty, and the pursuit of happiness. It also affects people's emotions.

Guns are necessary, and we need to have them.

Illegal aliens are committing crimes and taking tax dollars and receiving free handouts. We need to change the policy that helps every American and...

Bring down the drinking age.

There should be more security put into the safety of the american people To keep there information safe in cyber space. There are wars that wage on...

The Benefits of Rescheduling Marijuana

The economic and social benefits of marijuana legalization.