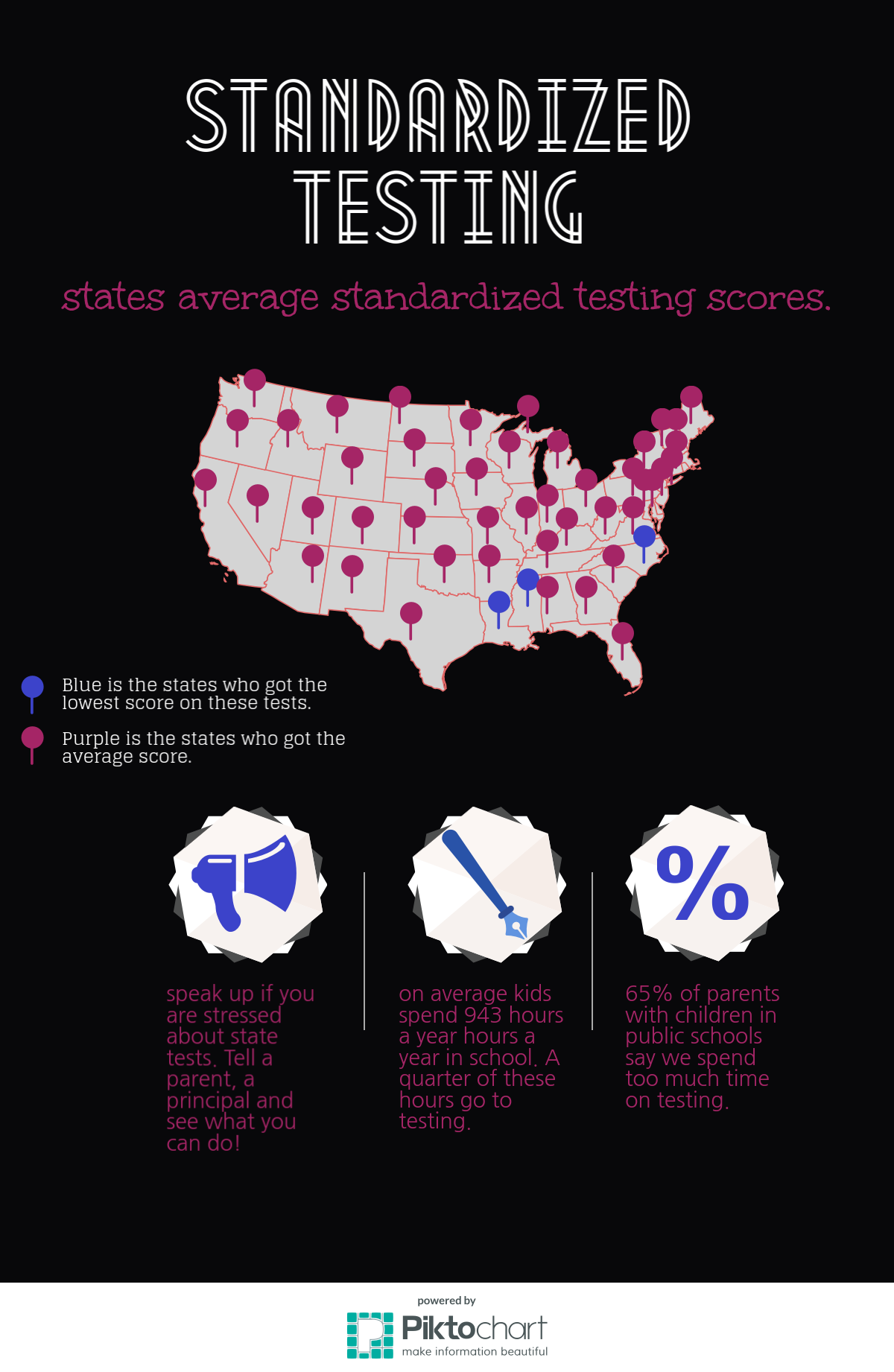 The topic of standardized testing has become more important over the years because the state continues to add more and more tests to the list that we have to take. Children across the world are impacted by taking a ton of standardized tests. All of these kids have two things in common:  stress and lack of time. All teens feel the stress when taking standardized tests, and adding to the stress is being judged by if they “know” the material or not based on this test. They also don’t have time to be a child because of all the time it takes to prepare for these tests.  Personally, I’m not a good test taker, so I know first hand how stressful it is to try to study for a new test that you have no idea what it's going to look like. I believe that a person's intelligence shouldn’t be based on a bubble sheet that they have to fill in.

Children are being robbed of their childhood because of the hours they have to spend studying for standardized tests instead of playing outside or doing something that they enjoy. Mar. 2009 research from the “Alliance for Childhood” showed "time for play in most public kindergartens has dwindled to the vanishing point, replaced by lengthy lessons and standardized testing” (“Is the Use of Standardized Tests Improving Education in America?”). Children are being thrown into testing as young as 4 or 5 years old which is impractical when a child's brain isn’t even close to being fully developed. How can these tests tell the child's intelligence if he/she can’t even tie their own shoe?

Standardized tests also take away from time in the classroom to learn about the real world, and instead, they are spending weeks on preparing for multiple state tests. “The logistics of administering high-stakes standardized tests, with the required proctors, makeup tests, and special accommodations, disrupts school routines, pulls teachers out of classrooms and reduces time for teaching and learning” (“Why More Standardized Test Won’t Improve Education”). Children won’t ever be independent adults if we don’t prepare them 100 percent in the classroom due to these tests. If kids don’t learn these things, they will grow up believing that they are vacuous because they didn’t learn everything they needed to know to prepare them.

Some may say that testing improves your learning and makes you a better student. Some people might say that it keeps them informed and prepares them for anything life will throw at them. Although the counterargument is understandable, the stress that these tests put on the kids can’t possibly make them a better student. I’m not saying we should banish the idea of standardized tests just simply cut back.

I propose that as a solution to fix this problem we could cut back the amount of standardized tests we take. We could have students take one every other year in elementary and middle school. In high school, we could have students take one their freshman year and one their senior year. If you, the future President, will do this, it will show kids that improvement is what really matters not a test score. As the future President, you could also talk about this issue that we are having. And as a current high school student, I think that this would be a big relief.

I believe that we should not say that someone is only as smart at their test scores and that we shouldn’t let these children believe that. These tests are too much for children across the world, and kids are becoming too stressed out. I really appreciate you for taking time out of your busy day to read my letter. Thank You.

standardized testing education standardized testing problems state testing
Published on Nov 8, 2016
Report a problem... When should you flag content? If the user is making personal attacks, using profanity or harassing someone, please flag this content as inappropriate. We encourage different opinions, respectfully presented, as an exercise in free speech.
Oak Hills High School

I think this country is failing in education and we need to stop it! An average school day is 6 to 7 hours and only about two of those are spe...

In this letter I will share why college tuition costs should be reduced.

A plea for common sense in the growing realm of standardized testing and the stress it causes students.