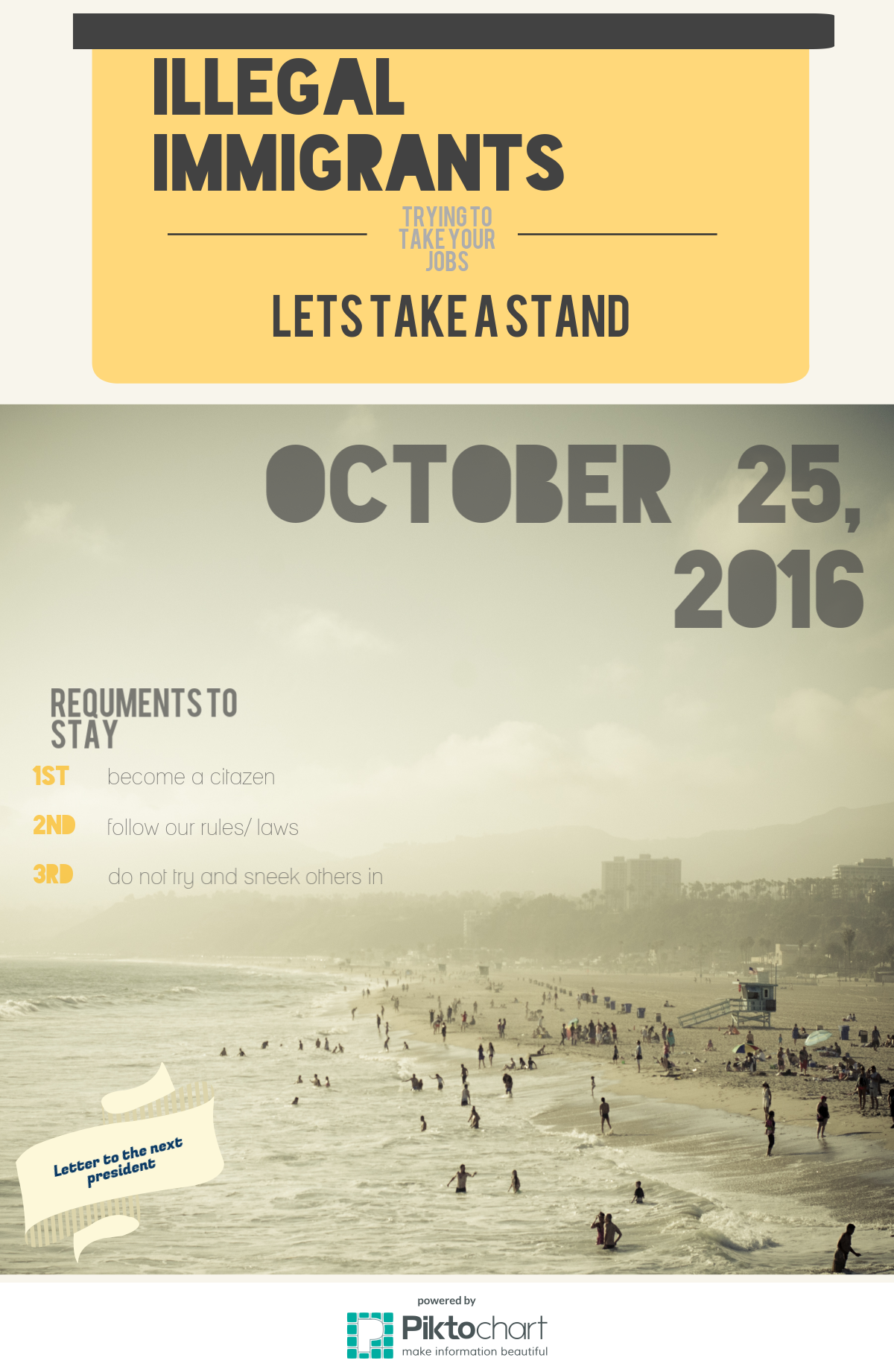 I think that illegal immigration is a problem that impacts Americans. This topic has become more important in recent years because it is happening more and more. Every body is impacted by illegal immigration because when they come here, they need jobs and they will take over the people´s jobs that already living here. This might impact me because they might take a job that I was going to try and get. Illegal immigration needs to change because it is becoming more of a bigger issues in the world today. According to ¨Alabama residents and state lawmakers alike point out that only 5,000 illegal immigrants lived in the state just 20 years ago. Clearly, they argue, illegal immigration to Alabama is skyrocketing, and something must be done about it¨ ("State Immigration Laws"). This quote means that they are trying to make illegal immigration not allowed by making the living conditions hard; however, the immigrants are not leaving because it was not as bad as it was back in their homeland.

First, illegal immigration is breaking Americans apart. According to research,¨With over 11 million immigrants in the United States illegally, the issue of illegal immigration continues to divide Americans¨ (¨Illegal immigration¨). This quote shows that changes need to occur because if we are not together on some things, then the problems will never get fixed.

Also immigration is a big problem because it is happening in a lot of different places around the world. Some people believe that illegal immigrants are criminals, and we should put them in jail and not just kick them out of the country. According to research, ¨They argue that people in the country illegally are criminals and social and economic burdens to law-abiding, tax-paying Americans¨ (¨Illegal immigration¨). This quote shows that some people think that the people that come into this country illegally should be put into jail because it is similar to committing a crime.

Some people might say that illegal immigration is fine because they just need a place to live too and since they are living here they have to buy things and that is helping the country out. This is not true because yes, they are buying things, but they are not paying taxes like everybody else has to.

The time has come that we need to change how many immigrants come and stay in America without becoming a citizen. I think that we can fix this issue by not letting any more immigrants in before we get all the problems with the current ones figured out. And then when the problems are fixed we can let more people in.

I think that illegal immigration is a big problem in the United States today. The changes that I gave will help the country if you use them because it will not let as many immigrants in and the ones that are already here will be forced to become a citizen or they will have to leave. The people will not just be let in from now on. This will also help out with the debt problem a little bit because now they will have to pay taxes. Thank you for reading this letter, and I hope that you will think about changing this problem.

immigration illegal immigration border security Border Controls jobs
Published on Nov 9, 2016
Report a problem... When should you flag content? If the user is making personal attacks, using profanity or harassing someone, please flag this content as inappropriate. We encourage different opinions, respectfully presented, as an exercise in free speech.
Oak Hills High School

I believe we don't need as many illegal immigrants, which is becoming a problem.

Every Immigrant Deserves a New Beginning

We don't need a Wall of Separation, we need a Gate of Progression.

The action called for decreasing the flocks of Mexican Immigration, but not everyone said that was the best solution.