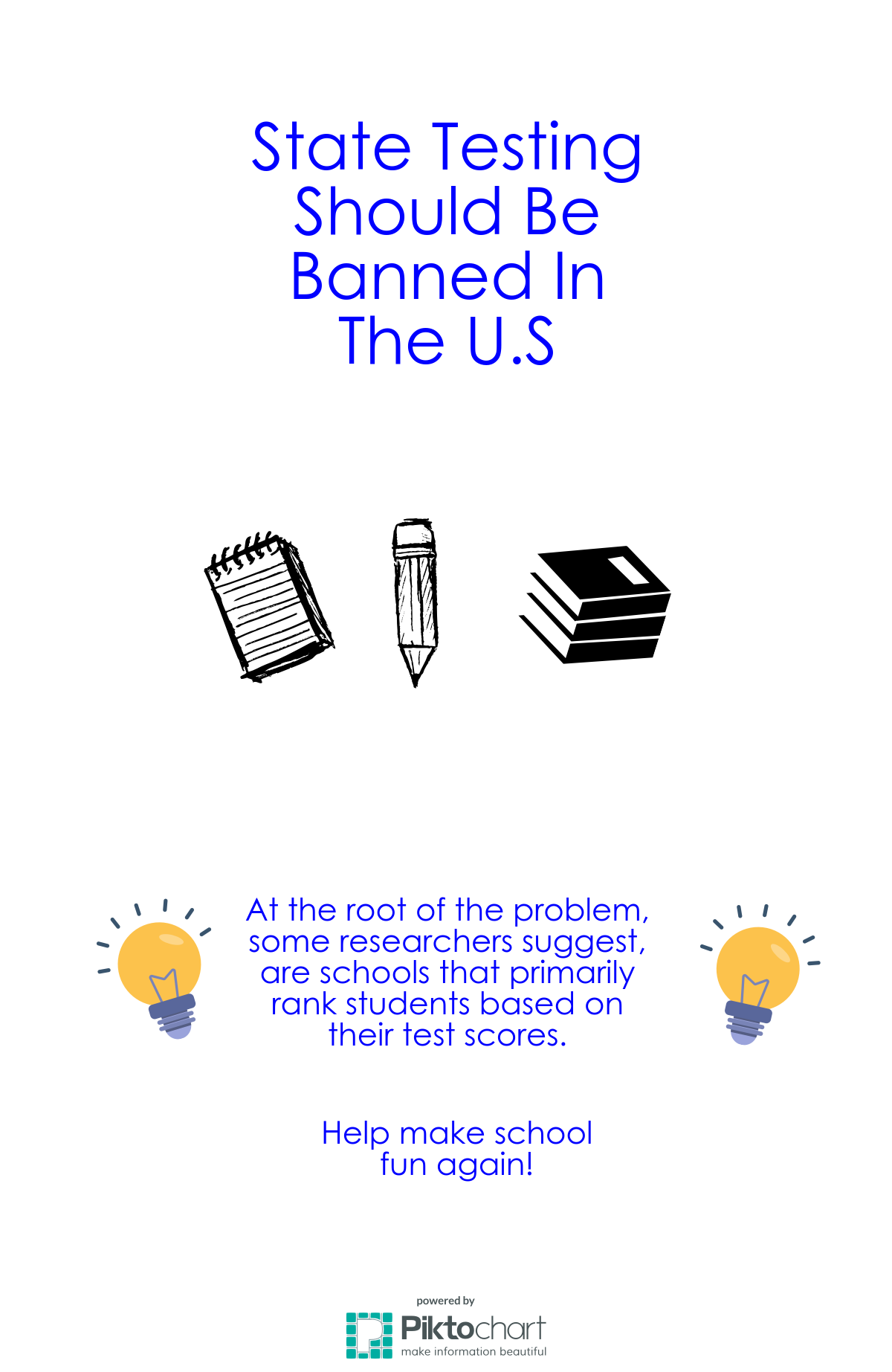 Education, specifically testing, has became a big problem over the years. This impacts the students because not all students are good at taking the state tests. This impacts me because the classes that I would like to take, I can’t because when we take these tests based off my test scores I get put in a double bell of math or reading. This is unfair because those types of classes just take up more opportunities to get more credits that I need to graduate. Because of this, I believe that state testing should be banned.

First, state testing should be banned because, according to the following website, ”Standardized tests are unfair and discriminatory against non-English speakers and students with special needs. English Language Learners (ELL) take tests in English before they have mastered the language. Special education students take the same tests as other children, receiving few of the accommodations usually provided to them as part of their Individualized Education Plans (IEP)” (procon.org). This is saying that the tests are unfair to people who have a learning disabilities.

Also state testing should be banned because according to the following website it states that ”Standardized tests are an unreliable measure of student performance. A 2001 study published by the Brookings Institution found that 50-80% of year-over-year test score improvements were temporary and "caused by fluctuations that had nothing to do with long-term changes in learning” (procon.org). This is saying that these tests don’t really show a student’s improvement with their school work or learning ability. According to the website, "I think part of what's going on is a kind of decades-long erosion of confidence in education professionals who in prior years, certainly before the 1980s, were more likely to be seen as neutral appliers of professional expertise. For a lot of reasons, they have now come to be seen as self-interested organizations looking out for adult interests instead of kids' interests" (Henig), which shows that the test companies are in it just to make money, not to help the kids.

Some might say that we need standardized testing to show what students learned and how good of a job their teachers are teaching them what they need to know. This is not true because these tests that the state makes the students take aren’t even what we learned half the time in class. So these tests are pointless and should be banned.

It is clear that state testing should be banned. Students do enough by having homework and trying to keep grades up in classes. The last thing they need to worry about is studying and preparing themselves for tests that are pointless. Parents, teachers, and even principals need to understand the stress that those tests put on us as students.

For these reasons I believe that state tests should banned. It affects students, like me, because you have to realize that it’s unfair to be put in classes based off of test scores. Thank you, future President, for taking the time to read my letter.

education students state testing standardized testing stress
Published on Nov 9, 2016
Report a problem... When should you flag content? If the user is making personal attacks, using profanity or harassing someone, please flag this content as inappropriate. We encourage different opinions, respectfully presented, as an exercise in free speech.
Oak Hills High School

We need to lower college and university tuition cost before our economy collapses.

Dear Mister or Misses President, The Amendments in our constitution were established for a reason, that reason is to assure the freedom of our peo...

Funding for schools is unfair and leaves many children disadvantaged. How can we solve this issue?

Increase the cyber security of our country.