I bring my sincerest congratulations to you for winning this year’s presidential election, Mrs. President. You have made an amazing breakthrough with this accomplishment, and I know that you will do a great job as our future president. While I do show my sincerest regards for you, I would like you to be aware of the current immigration situation in our country and how it affects the Latino community.

As you may know, illegal immigration numbers plague the United States. Over eleven million undocumented immigrants entered the country in 2014 with Mexico taking the blame for 54 percent of this number (Krogstad, Passel, Cohn). Some Americans share the viewpoint that illegal immigration is a threat to the country, but things are not always as they seem. They carry this belief that they pose a threat to the American economy by taking jobs or by tarnishing the name of what it means to be an American. However, some of these Latinos have nowhere to go. Data collected by Pew Research Center states that many Mexican immigrants come to the United States to escape the unfortunate circumstances in their home country. They would like to take part in the opportunities that this country has to offer.

Deportation is the biggest nightmare that torments the Latino community. Mass deportations tear families apart, and I know how important keeping families together is to you. It is disheartening to see many Latinos live in the shadows in order to avoid deportation. For example, a group of Maryland students skipped school in order to avoid the deportation raids that occurred earlier this year (Gross). This is no way for people to live their lives.

President Obama has made significant strides for our community by issuing the DACA legislation for some citizens; however, it is not simply enough. I would like for you to expand on this laws by creating complete immigration reform for Latino immigrants. A simple application process without the hassling wait times of a visa would be the strides we need in our community. I know that border security is a priority. Therefore, legislators can meet national security standards by proposing extensive background checks for immigrants. Furthermore, record keeping for economic and taxing purposes can be a crucial key to ensuring that this is successful (Mannes). I know that complete comprehensive immigration reform was a component of your campaign and I believe that you will achieve the goals of your campaign thoroughly.

I urge you to help all of the Latino families that have to sit in the somber silence in the corners of the United States. I would like you to continue the progress of Obama’s presidency and expand it into something that can keep Latino families together, which is reflective of your “stronger together” campaign. The United States' foundations were based on immigration and the blending of cultures is what makes up the modern American identity. 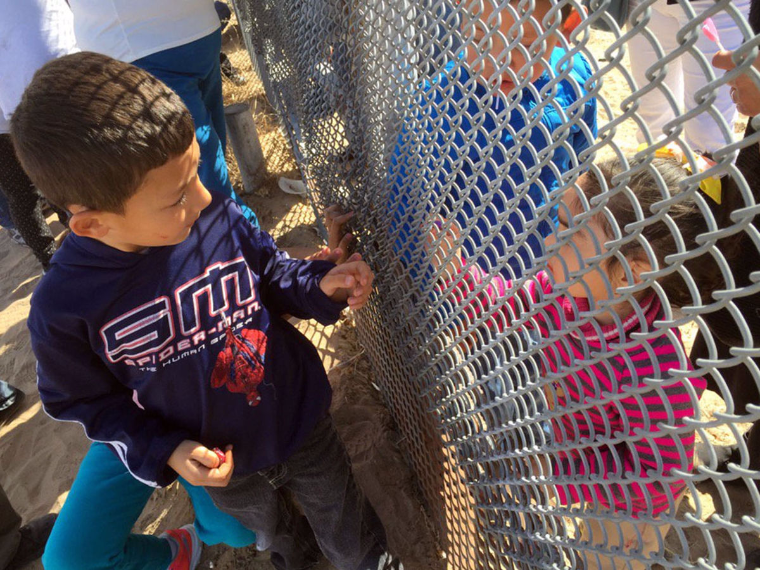 Mannes, A. Benjamin. "Background Checks: The Achilles' Heel of Immigration Reform." The

Tribune News Service. Families Reunite at U.S.-Mexico Border Fence: ‘We Touch Hands, but It Is

immigration latino community mexico relations
Published on Nov 2, 2016
Report a problem... When should you flag content? If the user is making personal attacks, using profanity or harassing someone, please flag this content as inappropriate. We encourage different opinions, respectfully presented, as an exercise in free speech.
Eastern View High School

Gun Ownership for the Lawful and Sane

In recent years, there have been many different interpretations of the Second Amendment. It is important that the right to bear arms remains intac...

What decision will you make?

A problem many students face within the American school system is standardized testing and the way it is presented to them. The problem must be tak...

I am writing this letter to you because I have taken an interest in the United State’s relationship with foreign countries.

This letter is about the struggles of teens in the LGBT community and how social and domestic support is important for their development in their t...

Our veterans are not being treated right.

Mr. President, My name is Sarina Shiflett, i am in high school and i live in northern Virginia. The topic i have decided to discuss is your ch...

Hello Future President of The United States my name is Nick. I would like to know what you will be doing with gun control while you are ou...

Let us protect ourselves!

Mr. or Mrs. president of the United States there should be policies on Gun Control. The reasons for this is because people who have a violent backg...

Abortion should be illegal because it denies the fetus its natural rights to live, and some may think it is a form of contraception.

Dear Future President, Name is Jordan O'Bryant and I'm here to talk about a main problem in the environment today. There are many things wron...

Don't Fret, they aren't a threat

The discrimination of a large group of people based on their gender identity.

Being a topic overlooked and understated, human trafficking is a huge problem in our world today.

How to satisfy the American public, without encroaching upon our rights to carry.

Airport security has changed since 9/11, but more needs to be done to ensure our safety.

Statistics and reasoning for why and how mental/emotional health should be integrated into schools.

Education in this country has been rapidly decreasing in value for quite some time. Many people have very poor quality education, and some not at a...

All letters from Virginia →

Immigrants are not treated right in the United States.