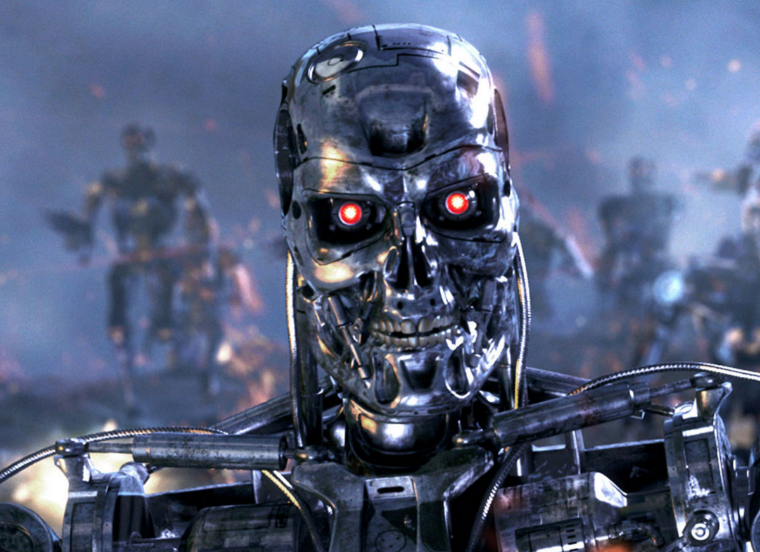 Artificial Intelligence (A.I.) should not be used in the military. This is due to the fact that the fully autonomous beings could learn that the human race is a threat to its survival and may kill us all and learn to create newer and better A.I. without the help of humans. I hope that after the paper you will know the right thing to do.

Sadly, I myself have no experience with this, however other people have. One such example is the U.S. banning a children's toy from going into the NSA building and the Pentagon in the 1999, this however was not for their own use. The toy was a Furby a cute little ball of mimicking fuzz. Even the creators of the popular children's toy Dave Hampton and Caleb Chung claimed that it couldn’t record anything, however it could learn classified information and blab while the creators thought it couldn't, so it advanced passed its original programming or just did something unexpected.

Some things to cause an A.I. uprising will be things such as A.I. becoming too intelligent which is a large problem because the A.I. will realize that humans are a threat to its survival such is shown in the movie “Terminator” by Skynet. The effect of this is every human dying on the planet Earth just as Skynet. Another cause is the ability of someone hacking into the system and playing a simulation that eventually goes too far by it affecting the real world this is shown in the movie “War Games” made in 1883. A child played a simulation and the computer didn’t realize that war is futile until the humans make it play Tic-Tac-Toe against itself but, I don’t think it will be that easy for it to learn futility. Furthermore if the computer had access to the nukes/ missiles the war that would break out from that would not allow anyone to win, and the A.I. would also lose that is why futility exists, to make people know when something is useless.

Now it's your turn to keep the world safe. I can’t do anything being 14 years old but, you have the opportunity. I hope that you won’t let this world come to an end due to a computer uprising. Additionally I have thought of some ways to prevent and completely stopping the robot revolution. To prevent it simply make it so the A.I. has a kill switch on every important panel in the base the A.I. is in. Also a way to stop the revolution altogether is to have the room with the A.I. computer surrounded by E.M.P. turrets. Good luck and godspeed.

Ww2.kqed.org Are Artificially Intelligent Systems worth the risk Sencer

nytimes.com/2016/10/26/us/pentagon-artificial-intelligence-terminator.html?_r=0 The Pentagon’s “Terminator Conundrum” Robots that could Kill on their own.

War military security safety
Published on Nov 7, 2016
Report a problem... When should you flag content? If the user is making personal attacks, using profanity or harassing someone, please flag this content as inappropriate. We encourage different opinions, respectfully presented, as an exercise in free speech.
Northview High School

My name is Aidan Lawrence, I am a fourteen-year-old and from Grand Rapids, Michigan; I believe that all people in America deserve health care and w...

Kids are hurt by these hurtful words.

Why we have abortion and why I disagree.

I am a 9th grader at Northview High School. I am writing about animal abuse and poaching and why it's an issue.

I am a student at Northview High school in Grand Rapids MI, my name is Payne L., I am 14 years old. I am wondering when we are going to get better ...

You Don't Have To Support Us But Stop Hurting Us.

There are so many problems regarding LGBTQ people. People all across the nation are being hurt, bullied, abused, and even killed based on their se...

In this paper I talk about how Full Auto firearms need to be banned for non military use in America.

I think police brutality is a problem.

Stolen Valor is an issue that needs stricter laws.

I'm in ninth grade and I'm concerned about the consequences of rape.

LGBT couples should not be denied the right to adopt a child because of their sexual orientation.

Suicide is the tenth-leading cause of death in the United States. 85 percent of suicides attempted by gun are fatal - so why aren't we doing more a...

People around the world everyday experience human trafficking, but how much do people really know about it? We ourselves call America the land of t...

College cost needs to go down now otherwise how can we future adults make a good living?

Our military needs to know how to organize military funding and train troops better.

The military funding should be higher so we can defend and defeat other military and other terrorist groups.

A State of War

We do not need further military spending.