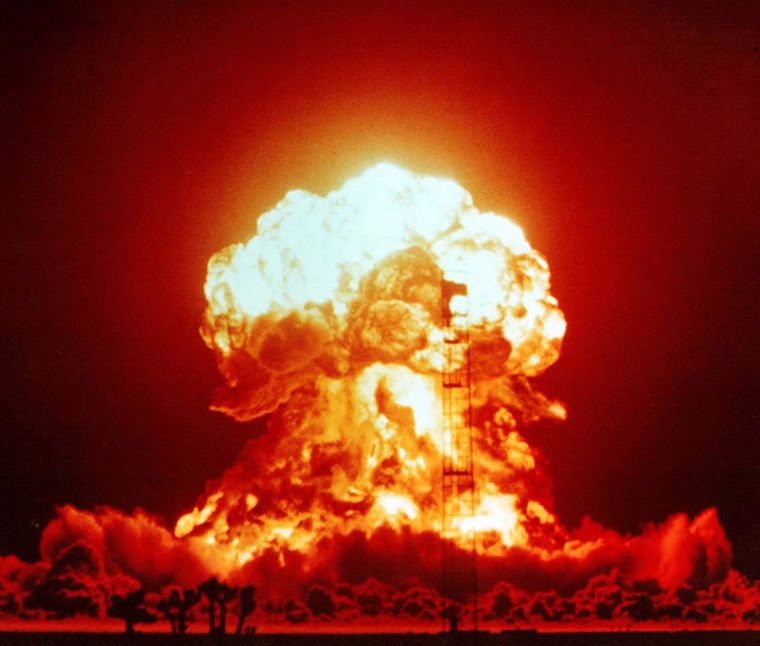 There are new and better weapons constantly being researched and created. They are an important part to our world security. However, there are now many of these weapons are threats to the world. They no longer are useful to world security, and they do not solve our current world problems. Instead of creating peace like they were meant to, they are creating most of the danger and insecurity in the world today. Yet we are spending more and more money on them everyday. The US's budget should not be wasted on nuclear weapons; we should be focusing on other world problems instead.

This has been a problem in the world since the first weapons were invented. Many countries work on new weapons, for what they call defense. In truth, they are inventing weapons that will not serve as any defense. A nuclear weapon used for defense will leave a huge fallout, which is not something a country would want. An EMP (Electromagnetic Pulse) will not only affect the possible enemy, but our cities too. A bio weapon will result in death on our side too. These weapons are all unfit for defense. So why do we create them? The United States has over 7500 nuclear weapons, although only 2000 of them are active, according to The Week. These weapons do no purpose in the world other than the fact that they spur other countries to follow suite, with their own weapons, causing the world weapons industry to grow more and more dangerous.

With our country leading the production of nuclear weapons, other countries will be sure to follow. But what will a poor country do? They will most definitely not sit by as all their enemies invest in more bombs and weapons. So they will be looking for cheaper means. This may involve bio weapons. Bio weapons are called the “Poor man’s bomb”. This is not without reason. A bio weapon or chemical weapon can cause almost as much death and destruction as nuclear weapons, and 100x less costly. We, and many other countries, all agreed to destroy these weapons after World War I, when biological warfare was first used significantly. Right now, the US says they will have destroyed them all by 2023. However, the original date was 2007, according to The Week, and that did not happen. So what will the US change this time?

As stated in the article “Nuclear weapons cost what in 2016?” by Theresa Shaffe:”Nuclear weapons should be on their way out the door according to President Obama’s 2009 Prague speech and the recent release of the 2015 National Security Strategy that states, “No threat poses as grave a danger to our security and well-being as the potential use of nuclear weapons and materials by irresponsible states or terrorists. We therefore seek the peace and security of a world without nuclear weapons.

So if nuclear weapons pose more of a risk than an asset, why exactly is the government planning to spend $12.6 billion in 2016 to modernize our nuclear arsenal? These weapons don’t keep us safe from the threats of climate change, Ebola, or terrorists, so why do we keep investing more and more money into them when they don’t do anything to address the security threats we face today? This just shows that the world is going to keep on producing and inventing new weapons, even though the world has enough weapons to blow the Earth up 100 times.

So what do we keep these weapons for? We are simply hoarding massive amounts of nuclear weapons, and these could destroy the earth hundreds of times. Yet instead of starting to destroy these weapons, we continue to make even more, for reasons that we must keep ahead of other countries. Except that most other countries close to our military might are our allies, not enemies. Countries such as North Korea claim to have lots of destructive weapons, but in fact, according to “Chemical and biological weapons: The poor man’s bomb, by the federation of american scientist”, North Korea has only enough resources to build 12 nuclear bombs. Compared to our 2000+ active warheads and our other 5000+ inactive ones, we surely must have enough to coerce any countries we need to”

The world will definitely never be a peaceful place. Humans are deadly by nature, but that does not mean we cannot try and change our nature. Everything can change in the world with one press of a button, that is set to activate on your fingerprint. This should not be the way it is. We should be striving to finish destruction of our chemical weapons, and making more restrictions upon our nuclear and biological weapons. As our next president, you can help this happen by trying harder than other presidents have, and making sure the world does not keep trying to advance its weapons industry. This will definitely not fix the world’s problems, but will solve one major one and allow us to try and solve our other problems. Look around at the madness in the world, and please take some measures to fix it.

nuclear weapons security economy world events
Published on Nov 3, 2016
Report a problem... When should you flag content? If the user is making personal attacks, using profanity or harassing someone, please flag this content as inappropriate. We encourage different opinions, respectfully presented, as an exercise in free speech.
East Junior High

This is about terrorism and how it affects everybody.

What will we do when we meet our oil crisis?