I am writing you today because the rights of over 100 million American citizens are being threatened. Many different governing bodies and politicians are trying to ban guns from the United States. By banning guns they are trying to ruin an over 240-year-old tradition. Guns should be allowed in the US because they can prevent criminals with guns from taking lives. Guns are not what are killing people, but it is the bad people who are killing people. I live in the US, I am an American citizen, and there are members of my family who are gun owners. I love the USA and it is the best country in the world, but when the government is trying to take away our rights, I feel the need to tell my side of the story, and the story of millions of other Americans. The reasons why guns are not only wanted in the US, but why they are needed in the US are the beliefs of millions of Americans and we need to be heard.

Guns can not only be used for bad but they can, and have been used for good in the past. There have been many cases where citizens carrying guns have stopped crimes. CBS local news reports “11.1 million Americans now have permits to carry concealed weapons, which are up from 4.5 million in 2007” (CBS). This shows that there are millions of Americans that sometimes carry weapons with them legally every day. If one of those people had been at Sandy Hook Elementary, or in Pulse Nightclub, they could have stopped the shooting from happening, or could have stopped it from being as tragic as it was. Gun control could make that number of people who can carry guns go down, and research shows that a decrease in guns will not decrease crime, but will increase it. CBS DC says “There has been a 22% drop in both murder and violent crime rates during the same time period that CCW (Concealed carry licenses) permits have increased” (CBS). This is because criminals know that if citizens carry guns, they are more likely to be stopped. Therefore, if guns are taken away even from the good people, then some criminals will still have guns. Criminals will break the law if it helps them, and there will be no good citizens to stop them.

Guns are not at fault for the killing of thousands of people each year, they are simply inanimate objects. People are the ones who are killing one another. If guns are taken away then it will not end killing in the US. One of the guns in the US that the government is trying to ban is assault rifles. This is because they have big magazines, they are semi-automatic, and they “look scary.” However, according to the FBI in 2011, 726 people were murdered with people’s bare hands, feet, or fists, and only 323 were killed with rifles or assault rifles. This shows that assault rifles are not the problem in the US, but it is the people who are the problem. This also shows that people who feel the need to kill people, will kill people no matter if they have guns or not. In Great Britain, there is a small population of only 64 million, and they have placed a country-wide ban on guns. However even with that ban on guns, according to Citizen Reports UK, over 500 people were killed in great Britain in 2011 without the use of guns. This proves the point that even if guns are banned in the United States then there will still be killings. There are still problems that need to be solved in other aspects before politicians try to place the blame on something else.

YOU, the President of the United States are there to protect the people’s rights. YOU can prevent the ban of any weapons in the United States. YOU can help promote law-abiding citizens getting concealed carry permits to help prevent, and stop crime around the country. If you let guns be taken away from the good people, crime will spike in the US. That could be bad for small businesses, it could cause loss of jobs and loss of life. Anyone in the US can help prevent the ban of guns too by speaking out, voting against gun bans and restrictions, and can use their second amendment right, and begin to own and carry guns themselves. While some may say guns should be banned because they kill people, and are responsible for mass shootings. If we allow guns to stay in the hands of good citizens then we can help prevent school shootings and other mass shootings. When I was in the Third grade, an unarmed man was shot at a baseball game of mine. If a good law-abiding bystander had a gun before the shooting happened, it could have been prevented. The good citizen could have scared or threatened the shooter. They also could have shot the shooter if necessary before he was able to harm anyone else. If no guns were allowed, then there was no chance that the shooter could have been stopped. There would still be a large chance that the criminal would still have had the gun because criminals will not follow gun laws. The majority of people in the United states follow the rules. If they carry a gun, they can not only protect themselves, but they can prevent even more crime from happening across the United States. Any citizen deserving to own and carry a gun should be able to so that crime can be prevented in the United States. ANYONE, this means any good citizen could carry a gun. They could help make a difference in the United states by standing up for your second amendment rights, and help to stop crime in its tracks. Thank You for taking time out of your very busy day to read my letter, it means a lot to me, and many citizens in this great nation. 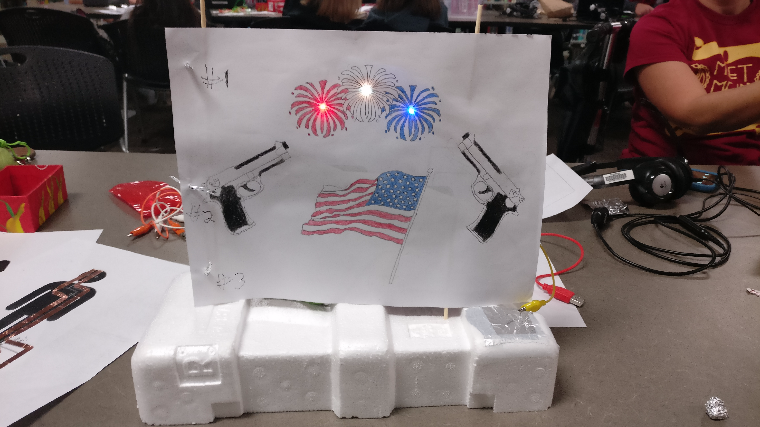 gun issues second amendment crime rate
Published on Nov 7, 2016
Report a problem... When should you flag content? If the user is making personal attacks, using profanity or harassing someone, please flag this content as inappropriate. We encourage different opinions, respectfully presented, as an exercise in free speech.
Oak Hills High School

I wrote a letter to the next president regarding gun control issues in the United States.

Innocent people are losing their lives every day because of guns.

This letter is about needing gun rights within the U.S. and why gun restrictions do not work. Restricting guns will only cause more problems, leavi...

My standpoint on Gun Control