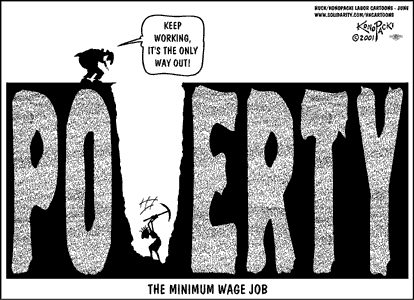 Seven dollars and twenty-five cents per an hour. Think that is the amount 2,561,000 people have to live on and people work to provide for family or even for education {college} to be something someday. A slim amount of people said that they get support with minimum wage. People of our county you're supposed to guide are below the poverty line or struggling to pay bills make ends meet. So what are you going to do about it?

Minimum wage is literally minimum not much. they are planning to raise wage to fifteen dollars by July first 2021 but that’s to far so many people will be working till they drop. If the government increased minimum wage now the standard of living will increase. This will make job growth but to raise it could also raise the unemployment rate by 2% but the poverty would be reduced by 20% in about a year or two from now according to the department of labor people that are younger than twenty get paid two to three dollars less an hour that difference can do a toll.

My solution to this minimum wage problem by increasing the wages by putting jobs with more work. So then after taxes people can still pay bills. We need to to start now so our bill can be passed by congress for the president yes you to sigh. Don’t make any one else that is struggling wait . We together can make this country better and united. Prove yourself to your title and your country.

The thing about minimum wage increasing it could also raise the poverty line. Once you raise the wage they will try to cut back hours and the amount per a hour wont matter. Places will have to raise the amount for needs. If they also higher the wage of unemployment levels will rise no doubt will be the lose of seven twenty-five to ten dollars a hour but to fifteen dollars will reduces the cities employment by 15,270 private jobs lost according to procon.org. The rate of unemployment goes from 7.9% to 11.8%.

Imagine living in a world were you could see a women being able to buy her kids new shoes. Then ten homeless people turn into six and the numbers keep going down. We need more and your voters are asking you for help can’t you see that don’t ignore.

minimum wage Poverty economy
Published on Nov 7, 2016
Report a problem... When should you flag content? If the user is making personal attacks, using profanity or harassing someone, please flag this content as inappropriate. We encourage different opinions, respectfully presented, as an exercise in free speech.
Creekland Middle School

I strongly suggest switching from using oil and coal, to using an electricity grid or solar panels.

Death Penalties for the Innocent ?

Women and men should have equal rights.

Are college students money machines? Do they go to college for education or to pay off their college tuition debts? Is going to a good college real...

Dear Mr. President My name is Steven Zou and I have lived in Philadelphia since I was seven years old. Throughout my years here, I have constant...

Poverty is getting out of hand and if our government continues to do nothing about it our country will downfall.

The minimum wage should not be raised despite the long-held belief that it will reduce poverty and improve the standard of living.

The number of family farms in the U.S. has decreased in the past years, this needs to change.