The state at which our foster care system is at is horrendous. In 2014, nearly 265,000 kids entered child care. That means that a child enters the foster care system every 2 minutes. (FosterClub) It’s about time the government took back control of the system by monitoring and keeping tabs on where children are being placed and if the mandatory procedures are taken to assure their safety. This problem could be solved by cutting down the amount of money non-profit programs make, money should be distributed based off of the suitability of the foster parents.

In most cases, the government takes kids in the foster system and hands them over to a non-profit charity, which then places them with a family or someone to care for them while a more permanent solution is looked for. What people don’t realize is that these “non-profits” receive checks from the government for each kid they place in a home. The more kids they place, the more money they make. A social worker makes roughly $42,120 per year, the average salary is $50,000 per year. (US News & World Report) When your paycheck relies on the amount of kids you place, meaning you have no steady income, placing a kid in a home that may or may not be competent is not on your mind. There are many times when the blame falls on the government and then back on the non-profit organization and back to the government and meanwhile the child in foster care gets tossed aside and placed in another house where more money is to be made.

The New Jersey Office of the Child Advocates ran a comprehensive study of the current state of the foster system in 2008. They found that in 89% of cases the mandatory procedures were not followed. 32% of cases showed questionable suitability of the foster house. Only 7.7% of cases were found to have been followed thoroughly and according to the guidelines. (NJ Legislative) The child advocates themselves are aware of the problems in the field they work in. It’s about time we begin educating the public about the problems that are occurring in the foster system. Kids are constantly being abused and are living in conditions that are not up to par. Their are people out there that adopt kids for the sole purpose of using them as slaves or to use them clean their name on legal records. All of this without an ounce of care for this child. Who get’s thrown from adoption agency to adoption agency yearly, sometimes monthly. All without a word for how they are feeling or if they are comfortable.

There are multiple stories of kids in the foster system. How many times have you seen a story where the author is traumatized by the system? How many times have you seen a story where the author is happy to have been in the system, no matter what their previous life was like? Never is when. In 2014, more than 60,000 foster houses had lost their parental rights due to unsafe or unacceptable conditions. More than 22,000 young adults aged out of the system with no permanent family to look after them. (Children’s Rights) Like some problems the US faces, where people have to donate their money. This problem requires no money, just the time to fix the problem this country has faced since the creation of the foster system. With careful consideration and more adequate social service workers, we could fix this problem and make the life of kids everywhere better. Let America be a role model to other countries and allow them to see that fixing the state of mind at which people deal with America’s youth can forever end problems like abuse and neglect. 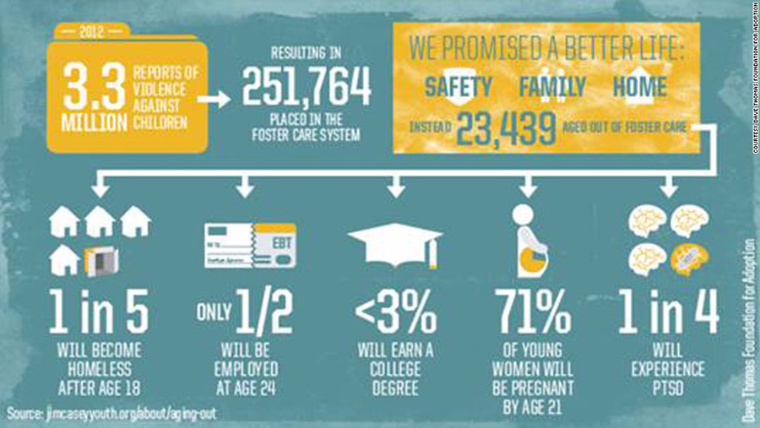 The Foster Care System is in trouble and so many kids are hurt each and every day. Kids who are left defenseless and in pain. Being in the system means giving up your identity. Just a number and dashes in a book of names. In the 2 minutes it took you to read this letter a child has entered the foster system. What are you planning on doing about it?

Images from (FosterClub and FFYS)

justice system identity change children's rights
Published on Oct 6, 2016
Report a problem... When should you flag content? If the user is making personal attacks, using profanity or harassing someone, please flag this content as inappropriate. We encourage different opinions, respectfully presented, as an exercise in free speech.
Weddington Middle

Early Childhood Education issues have become a huge setback for students and teachers in the United States and something needs to change.

I feel that the issue of racial profiling in America is a topic that needs to be discussed. I feel that discriminating against people because of th...