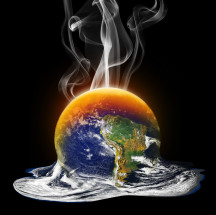 Image our most memorable and stunning historic sites and landscapes, such as the Statue of Liberty, the Outer Banks, and the Grand Canyon, now imagine them underwater within a century, destroyed and forgotten. This is what will become of our most treasured and memorable sites on Earth if we do nothing about climate change. Climate change is the biggest problem that humans face, because not only do the effects of climate change destroy our landscapes and buildings, but also our culture and history.

Climate change is causing much stronger disasters throughout the world. Human-caused climate change has increased extreme heat waves. As climate change increases, so does the impact of drought and heat waves. Higher temperatures causes higher humidity, which causes changes in precipitation. Global warming has caused an increased chance of having rain than snow.

Some people believe that climate change is not a problem. They believe climate change is a natural process on Earth. Climate change has not caused a rapid increase in sea levels, dangerous droughts, and stronger storms, until now. Greenhouse gases have not been a problem until the 20th and 21st century, when industry increased exponentially.

What can be done to decrease climate change? Solar and wind energy are renewable and safe energy resources. Solar and wind energy does not cause an increase in greenhouse gases, pollution, or melting of the polar ice. CO2 increases the amount of greenhouse gases and acidity of the oceans, (“North”) (“The Biggest Challenges of 2016”). Decreasing CO2 emissions will decrease greenhouse effects, this can be done by using renewable and safe energy resources such as wind energy and solar energy.

climate change greenhouse gasses drought fossil fuel pollution
Published on Oct 23, 2016
Report a problem... When should you flag content? If the user is making personal attacks, using profanity or harassing someone, please flag this content as inappropriate. We encourage different opinions, respectfully presented, as an exercise in free speech.
Orange High School

Climate Change is a problem that we need to address