Health care in the U.S. costs about twice as much as it does in the rest of the developed world. In fact, if our $3 trillion health care region were its own country, it would be the world's fifth largest economy. According to Business Insider, America is #37 in the World’s Best Healthcare Systems. Read more to find about why healthcare is expensive, how we can improve this and more.

In 2000, the World Health Organization released a report on the 37 countries with the best healthcare systems. The ranking was based on five factors: health, health quality, responsiveness, responsiveness equality and fair financial contribution. The US was ranked last. France was ranked first followed by Italy, San Marino, Andorra and Malta. All of these countries have paid healthcare from the government. Now, according to The Wall Street Journal, “It is certainly possible that spreading healthcare as evenly as possible makes a society healthier, but the rankings struck some health-care researchers as assuming that, rather than demonstrating it.” But, the actual document itself explains where they found the information that helped them.

Claimed by Investopedia, one of the reasons of high healthcare costs is defensive medicine. A lot of doctors are afraid to get sued so they order multiple tests even if they are sure what the diagnosis is. A Gallup survey estimated that $650 billion annually could be attributed to defensive medicine. But, according to Physicianspractice.com, “Practice defensive medicine that puts the full range of modern diagnostics at the patient's disposal. It's good medicine, good risk management, and the life you save may also be your own.” But, an article published by Forbes states that “Defensive medicine and the broken malpractice system are two of the major reasons that healthcare costs are soaring out of control” and that “patients’ claims would be heard more quickly and they would be compensated in a manner similar to our current legal system. The system would be funded with current medical liability premiums and would not need a tax increase or use taxpayer dollars to administer. Most importantly, doctors could focus on practicing medicine without the fear of being sued and could eliminate unnecessary tests.

On Commonwealthfund.com, it states multiple reasons why our healthcare is so expensive and solutions for it. One way we can improve our health care costs is by tackling the issues that have made things so expensive in the first place. “Wholesale cuts to Medicare and Medicaid might reduce spending in the short term, but they would also mean reducing access to care.”Or, “it might be found in the dozens of innovative experiments already under way in both the public and private sectors to transform how patient care is delivered and how we pay for it”. But, according to Medicare.gov, Medicaid offers benefits like nursing home care and personal care services. Even if your income tops Medicaid income levels in your state, you may be qualified for Medicaid spend down rules. Under the "spend down" process, some states allow you to become eligible for Medicaid, even if you have too much income to qualify. This process allows you to "spend down," or subtract, your medical expenses from your income to become eligible for Medicaid. On Washingtonpost.com, it states, “Not only is Medicaid failing patients, the program’s financial troubles threaten economic opportunity. Federal Medicaid spending alone will reach nearly $5 trillion over the next decade a driver of the compounding debt burden facing the next generation of Americans considering the nearly $17 trillion debt that Americans currently live under”.

Overall, I think that our health care can be improved drastically. This letter was made to inform you on how a lot of our American citizens are struggling with health care and still don't get what they need. Some of my reasons are that Medicaid is gaining most of the money from tax but it doesn't use it, defensive medicine is also using money when you don't need to, and that our health care isn't paid by the government. But these are only a few of the thousand reasons why we need to improve our health care. I hope you can do something about this as soon as possible.

Blackstone, Adam Taylor and Samuel. "These Are The 36 Countries That Have Better Healthcare Systems Than The US." Business Insider. Business Insider, Inc, 29 June 2012. Web. 30 Sept. 2016.

By Paying Health Care Providers One Lump Sum for All the Services Needed to Treat a Patient with a Particular Condition or Illness, the Incentive to Do More Simply to Earn More Disappears. Instead, the Emphasis Shifts to Providing Care That Helps the Pati. "Better Care at Lower Cost: Is It Possible?" - The Commonwealth Fund. N.p., 21 Nov. 2013. Web. 30 Sept. 2016. 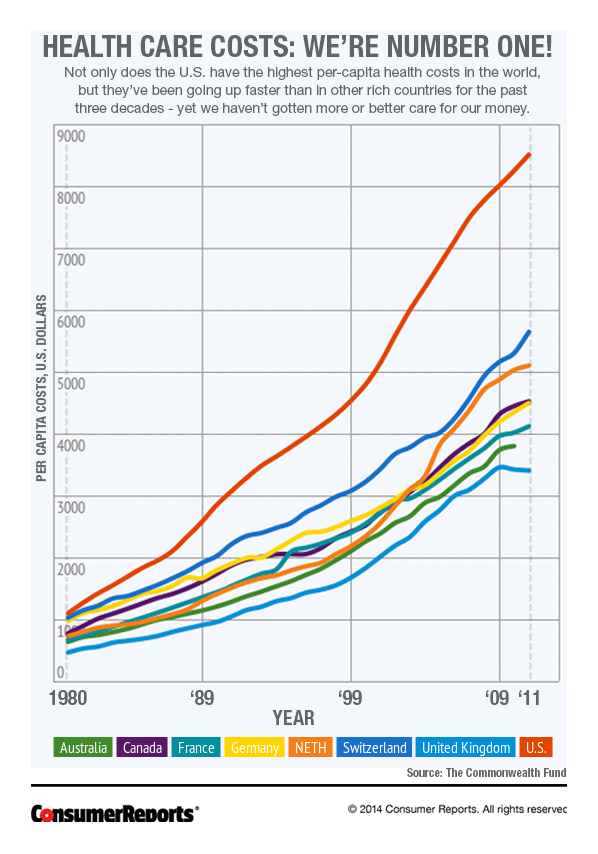 health money expensive
Published on Oct 10, 2016
Report a problem... When should you flag content? If the user is making personal attacks, using profanity or harassing someone, please flag this content as inappropriate. We encourage different opinions, respectfully presented, as an exercise in free speech.
Weddington Middle

We need to educate people on food education.

Healthcare is too Expensive Nowadays

Dear Future President, Healthcare expenses has become a big problem in the United States. We are ranked as having the worst healthcare system acc...