Do you love your pets, your friends, and your family? Yeah, I bet you do. Imagine if someone who you loved dearly was abused non-stop from entertainment/profit and they had no say in if they wanted to do it or not. According to Pet-Abuse.com, in 2011 there were 1,423 cases of animal cruelty, 70.1% were dogs, 20.9% were cats and 24.1% were other animals. This is a lot of abuse going on, and it’s still happening today! If we want this to stop, we need to make a change and stop animal abuse from happening altogether.

Dogfighting, Greyhound racing, and Cockfighting are all blood sports which involve the abuse of animals and the fighting of them for the entertainment of the people. Although dogfighting and cockfighting are banned in all fifty states, they still continue to appear all over the nation. There are also 21 greyhound race tracks still operating in 8 states. According to the ASPCA, sometimes in dogfighting, and cockfighting the animals are injected with illegal drugs to make them fiercer. Also, Greyhound racing often results in injury with about 11,000 dog injuries and more than 80,000 dogs in the racing industry already. Thinking about how people abuse these animals for money and entertainment just sickens me. These animals deserve to be treated fairly and not like some kind of toy.

Not only is animal abuse morally wrong, it can also have effects on, us humans, too. The Humane Society says that a number of studies have done research and concluded that people with crimes against animals usually had crimes against humans too. Of 36 convicted murderers, 46% abused an animal when they were younger. Also, if younger kids see animal abuse first hand, they will be 3 times as likely to abuse other animals/people.

My last reason is that animal abuse does nothing for others and can even harm us too. When people are trying to test out a new medicine or drug, they will usually test it on animals until they can determine it is safe enough. According to Cruelty-Free International, 95% of all drugs fail in humans because the animals results looked promising, but were actually misleading. This can cause lot’s of death to people all around the world who really need a cure but can’t have one because the medicine that is “supposedly tested” is unreliable. Even though over 115 million animals are tested every year, only 25 new medicines are approved by the U.S. Food and Drug Administration.

In conclusion, we need to stop animal abuse. It is morally wrong because we do it for fun and entertainment. It creates criminals who start abusing at an early age and can encourage others to do the same. And finally, it doesn’t help anyone in any way because animal testing for medicine is unreliable and will fail in most cases. And yes, I do know that we do have to kill animals in order to survive, but not to this extent! Animalequality.net says that over 3000 animals die every second around the world in slaughterhouses. That’s an absurd amount of animals that die every second. There are some animal kill counters on the internet that show you how many animals have died since you opened the web page. Those numbers go up very quickly. President, please try to encourage people to learn about animals and show them to learn to respect animals as we respect humans. 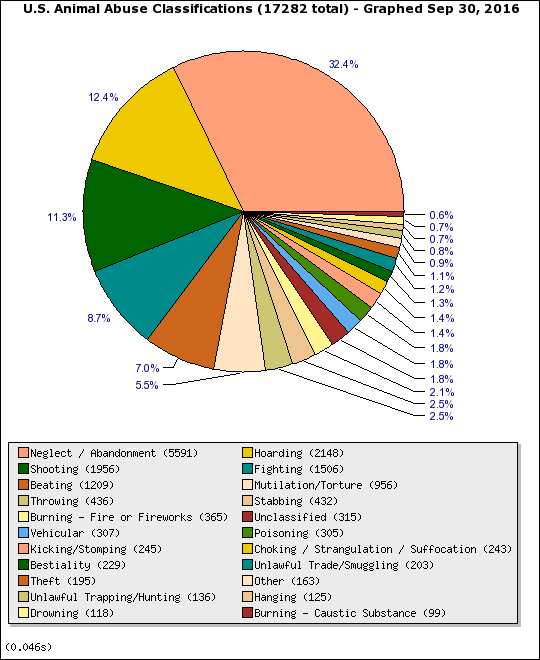 animal abuse abuse
Published on Oct 10, 2016
Report a problem... When should you flag content? If the user is making personal attacks, using profanity or harassing someone, please flag this content as inappropriate. We encourage different opinions, respectfully presented, as an exercise in free speech.
Weddington Middle

How to fix animal abuse for years to come.

Some farm animals right here in America suffer from abuse and unsanitary conditions.

Do you know how serious animal abuse has become?

Here's some of my concerns about child abuse and neglect.