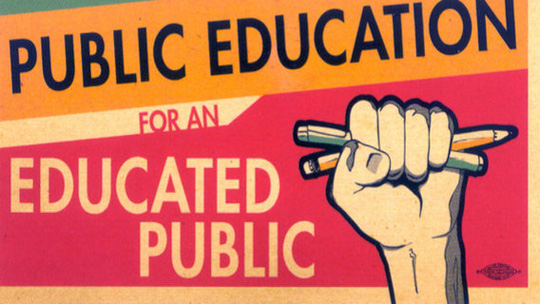 As the entirety of our generation slowly devolves into a conglomerate of humanity, with us each having our own “unique” and yet samely attributes, we watch helplessly as we look back on the cause of this shift. This situation is the potential future of both our society and our species if the current method of education continues. This possible situation is why the inadequacy of public school systems is our nation’s most pressing issue and why public school systems need to be changed.

Public schools stifle individualism and creativity. Schools use standardized testing as a way of measuring everyone which stops students from being creative. When everybody is put through the same assessment in the same way it forces people to learn the exact same information in the same way. This results in an inability to be creative because it is simply mindless regurgitation of what is taught to students. Teachers therefore have to teach a very specific curriculum, usually in a specific way. Although teachers have more freedom than the students, the teachers are still stuck in a similar situation as the students; they are not allowed much room for creativity (Standardized). Creativity is also discouraged by teachers and classmates. The rubrics that are used when grading students and the uniform nature of assignments result in students treating those assignments like checklists that require filling out. Most assignments in the public school system are not individualized and have very rigid structure in how to complete them. Even the “creative” assignments and classes such as creative writing use outlines and other restrictions to limit what the student can create. The grading system that marginalizes the individual now has become so generic as to not even differentiate between letter grades as they pertain to GPA is a major contributor in the stifling of student’s individuality.

Public schools do not provide a proper education and are too focused on a high graduation rate. Graduating high school students are still unequipped for the future. The National Assessment of Educational Progress reported that less than half of the graduating senior class was able to read or solve math problems (Hollingsworth). The civil rights organization known as Education Trust recently published a study that revealed the fact that “forty-seven percent of (graduating high schoolers) have completed neither a college- or career-ready curriculum,”(Hollingsworth). Also, public educational curriculums provide a lot of useless information and teach in ineffectual ways. According to Robinson, moral questions, worldviews, and the creation of our own opinions is ignored when it comes to public curriculums. These very important fields of information are entirely blanked out and ignored throughout most people’s educational career. Public schools focus on making students remember information in the short-term, only to be used until after the test. This method of memorization rather than truly educating is a major flaw (Robinson).

Some people believe that our public educational system does not need an improvement. They think that there is a relatively small cost for public school and public schools provide a place of education for all students (Chen). However, the cost benefit is irrelevant because those who would gain the most from it are people from impoverished regions. The public schools in these impoverished regions are the ones that are shown to consistently score lower on standardized tests (Katz). The larger class sizes of public schools cause each individual student, at least in a class size of about 30 students over a 6 hour work day, to only receives about 12 minutes of individualized learning (Katz).

This brings me to my solution; teachers are the key the a better education. Becoming a teacher should require higher qualifications than it currently does in the United States. In Finland, one of the highest achieving countries in the world (Teaching), all teachers require a master’s degree in order to teach. This high qualification helps produce better work environments and better teaching methods. Higher qualifications for teachers have been linked to more effective school systems as shown in a 2001 Congressional evaluation of teaching qualifications (Rothman). Another aspect for improvement is giving better incentives to becoming a teacher. According to Jon Hage, Founder and CEO of Charter Schools USA, “strong learning experiences and opportunities for educators lead to better outcomes for students.” This high authority figure on public education proves the need for better educators (Reiss). A study conducted by Woessmann in 1994-1995, one of the largest case studies ever recorded, revealed that providing schools proper instructional material leads to better education and encouraging teachers to be more caring about their job as educators impacts that (Woessmann).

As Nelson Mandela once said, “Education is the most powerful weapon which you can use to change the world.” (Duncan) Nelson Mandela has always been a prominent figure and speaker for the improvement of public education. His belief of education’s importance further supports the fact that good education produces intellectuals, and it will be these future intellectuals that solve the rest of America’s problems. The capability to solve America’s problems is the reason that public education is America’s most important issue.

Woessmann, Ludger. “Why Students in Some Countries Do Better.”EducationNext.com, 2001,http://educationnext.org/whystudentsinsomecountriesdobetter/

education united states of america american issues public
Published on Oct 19, 2016
Report a problem... When should you flag content? If the user is making personal attacks, using profanity or harassing someone, please flag this content as inappropriate. We encourage different opinions, respectfully presented, as an exercise in free speech.
Orange High School

Regarding my support for the Pace Promise nationwide for students.

A discussion of the importance of education in America

We need some improvements to help our country. We have been secretly invaded by terrorists, and it needs to stop.

A college education helps people get better jobs, but the costs are quickly growing and putting students in debt.

This article expains on how many students need to have a better education and today how focusing is difficult.