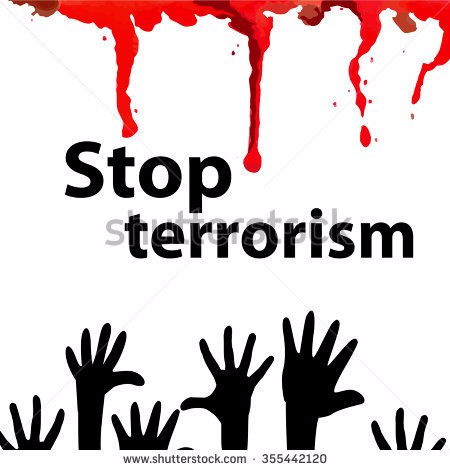 The first person seen coming out of the burning towers was a woman whose arm was hanging half off. It looked as if he arm had been sliced with a machete. Then a man was seen with huge pieces of glass embedded in his chest. There was also a woman screaming, with so much blood covering her face, that she couldn't see. It was like being in a real life horror film. This was the day that America decided to open their eyes to the threat of terrorism. That threat is increasingly growing and our Nation needs to make sure that we are always one step ahead and do not let events like this happen ever again.

Our nation is very fearful of the constant threat of terrorist attacks. After 9/11, a fear has been imposed upon many Americans. This fear came from when 19 militants associated with the Islamic extremist group al-Qaeda, hijacked four airliners and successfully carried out suicide attacks against targets in the United States (¨9-11 Attacks¨). Over 3000 people were killed during this attack (¨9-11 Attacks¨). A more recent fear has been imposed upon America when the Orlando night club incident struck our nation. The shooter was American-born but pledged to his ISIS allegiance. Forty-nine people were killed and at least Fifty-three were injured, creating a great fear.

Part of the problem is that America has become too generous about letting in immigrants. Legally, after 9/11 muslim immigration surprisingly nearly doubled (Hesson). Also, as of 2016 the legal foreign born population consisted of 42.4 million (Zong). A nation itself already has a big enough challenging of keeping their own people under control. The adding of these massive numbers of immigrants is just creating an even bigger threat. Taking into account that all those people are legal and have gone through certain measurements to enter our country. Illegal immigration is a completely different story. Illegal immigration is defined as "The unauthorized resident immigrant population is defined as all foreign-born non-citizens who are not legal residents. Most unauthorized residents either entered the United States without inspection or were admitted temporarily and stayed past the date they were required to leave. . ." (Seminara) There were 11.1 million unauthorized immigrants in the U.S. in 2014 (Krogstad, Passel, Cohn). It is very dangerous for our country to have this many illegal immigrants. There is no background information on these people and that could be very dangerous. Illegal or legal immigrants, as seen in many cases, have had contact with outside terrorist groups and helped set up terrorist attacks as a man on the inside.

Some people believe terrorism is not really a major concern that this year's president needs to focus on. They think America has already taken enough precautions into eliminating terrorist attacks. Yet there have been over 37 major terrorist attacks that have ended in the death of multiple American civilians since 9/11 (Ilich,). Also 80% of voters say that terrorism will be taken into consideration while voting for the next president (Fingerhut). So it is safe to say that the President definitely needs to take the threat of terrorism very seriously and solve the problem.

In order to help stop this terrorist problem America needs to take more precautions and technological advances need to be put in place in order to make America safe again. America needs to make sure they stay one step ahead with the current war technology. ISIS uses public media like Facebook or Twitter and use an encryption to encode their messages and we need to break these encryptions so we know what they are planning. At least 70 percent of the content the Islamic State is putting out is first coming on Twitter (Sheetz). Therefore, we need to be able to identify these encryptions and crack their codes, so we can remain one step ahead. Another great solution that will help deal with the terrorist problems is the use of drone attacks. Drone strikes make the United States safer my disseminations terrorist networks around the world. Drones also make US military personnel safer by not putting them directly in combat.

Do you really want to live in a Nation where we have to fear where the next bomb is going to go off, or when the next shooting is going to take place? I know that I don't. I want to live in a place where I never have to fear any such thing and I can keep my focus on succeeding in life. That is why it is so important that the future President of the United States needs to crack down of terrorism and make us feel safe again.

Ilich, Bobby. “The United States After 9/11: How Many Major Terrorist Attacks Have There Been In America Since 2001?” International Business Times , IBT Media Inc., 9 Sept. 2016, http://www.ibtimes.com/united-states-after-911-how-many-major-terrorist-attacks-have-there-been-america-2001-2414070.

“Should the United States Continue Its Use of Drone Strikes Abroad?” ProConorg, 14 Sept. 2016, http://drones.procon.org/.

terrorism
Published on Oct 23, 2016
Report a problem... When should you flag content? If the user is making personal attacks, using profanity or harassing someone, please flag this content as inappropriate. We encourage different opinions, respectfully presented, as an exercise in free speech.
Orange High School

Islamic terrorism needs to be stopped.

My letter is about the need to end terrorism, one of the greatest problems facing society today.