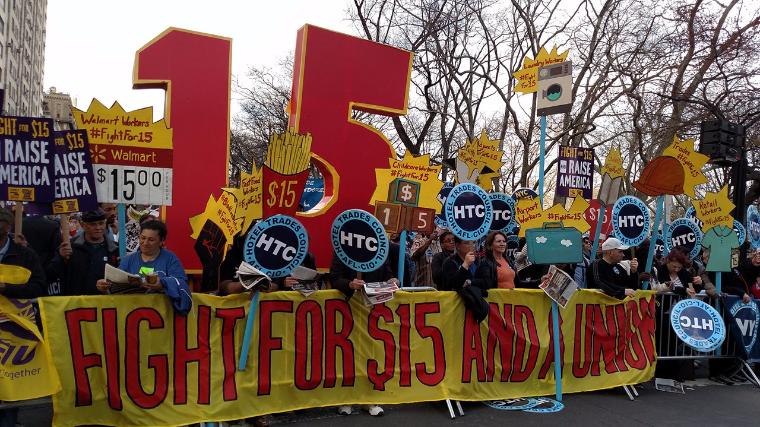 In 1974 economist Herbert Stein called inflation a “Hydra-headed monster” and that it “came in various forms—sometimes led by wages, sometimes by prices, by foods, by oil; sometimes it was domestic and sometimes imported.” He then went on, saying it was “growing two new heads each time one was cut off”, implying attempts to tame it only made it worse. I agree with Herbert Stein, inflation is a sensitive issue that has been worsened by attempts for redemption in the past, however, it still is one that needs to be handled. One of the major effects of inflation is that minimum wage has become too low; prices have increased when wages did not. This is a serious issue not just for average people but for families and single parents, and According to the U.S. Bureau of Labor, about 9.5 million of people who spend at least 27 weeks in the labor force are below the poverty line. That makes up 6.3 percent of individuals in the Labor force, nearly 40% single mothers.

The effects of a low minimum wage have struck many, leaving cities full of homeless and families struggling to bring home even food for the night, sometimes just going hungry. Minimum wage is a set number meant to provide for little more than one person. It is true that in some cases, people get a better job when they want children, and plan it ahead of time. However women who can’t afford an abortion or are pressured against doing so are sometimes forced to raise children instead of getting a better education, causing a chain effect of never being able to get a better job, and consequently providing proper nourishment for a child. Minimum wage was not set up to cover these types of situations, but nothing is indefinite. There can be change.

In some cases, raising the minimum wage is counter-intuitive, causing jobs to be lost and companies to go out of business. This is where wage fluctuations based on number of children/people (namely ones who are unable physically or mentally to hold a job) to provide for besides oneself comes in. Yes, it is true that enough for a family is more than enough to cover one person providing for themselves and no one else, and wages shouldn’t change much in those areas. I would like to propose a new plan to cover both of these problems. Perhaps wages should differentiate, but not just by state. People with others to care for should be issued a new minimum wage, with a set dollar amount added for each member. Children and the mentally disabled shouldn’t have to provide for themselves, rather focusing on education in order to be able to do so later in life. Poor families are forced to move around often, and sometimes children in a way pushed throughout the education system. This is not the kind of education we want our future to have. Changes need to be made now.

I understand the potential drawbacks to this plan. Work for families might decrease, companies only hiring those without to save money. However, this can be worked around. In minimum wage jobs, the information regarding how much is necessary could be withheld until after someone is hired, and firing made harder by having to provide a reason. Not having a reason other than wages could be the potential topic of lawsuit. This plan might even save the government dollars, preventing many from resorting to welfare or shelters and receiving government money. Overall, the issue of minimum wage is not one that can be solved by simply raising it, and certainly not by keeping it the same. While there could be problems, there could also be immense benefits, and this is one plan I believe you should take into consideration.

wages minimum wage wage
Published on Jan 21, 2017
Report a problem... When should you flag content? If the user is making personal attacks, using profanity or harassing someone, please flag this content as inappropriate. We encourage different opinions, respectfully presented, as an exercise in free speech.
Lewis Middle School

The Exorbitant Price of College Tuition

College tuition is exorbitant, and causes many problems for students, potential or enrolled.

Homework is always stressing kids out and i want to put a stop to it.

Kids should be able to work

The federal minimum wage must be increased for people who work all day and can't afford their own daily needs.