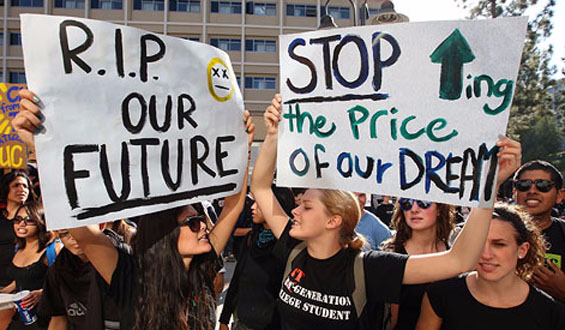 I am planning on going to college once I am out of High school, but I may not be able to for one reason. College tuition. If I want to go to a school at one college that has a high tuition, I might be forced to go somewhere else. This is happening to US citizens and does have an impact.

Why is this happening? What are the causes of high college tuition? We wanted higher education and there were then major increases in public subsidies for it. And the cost went skyrocketing. According to Adam Davidson of The New York Times, in 1974 (42 years ago) a four-year private college cost around $2,000 a year. Attending a public university cost around $510 a year. The average American would earn just under $13,000 a year. That’s reasonable. Now, tuition at a private college costs around $31,000 a year, which is triple what it was 42 years ago. Tuition at a public college quadrupled and is now around $9,000 a year. The first question that came to a lot of people's minds is “How would I afford that?”.

The effects from high tuition, the biggest being less enrollment in colleges. These people simply do not have enough money to pay for tuition yearly. This means that less people are getting the education they deserve which will affect their future greatly. Many jobs require you to have been through college and passed. People who do not have the privilege to go to college will most likely get a less paying job. America will be less educated than it should be.

Sure, colleges get more money from this and can then upgrade their schools and give the more privileged a better education. This money can be earned elsewhere or we can focus on this later. Right now, we need to focus on getting people into college which is most important. If we do not have people educated we will have important jobs with little to no one working.

This needs to be fixed, it needs to be corrected. You can be the one, Mr. President, to take this into concern and take action to get people into college and to lower the cost of college tuition. This would be a great change in America and have a big effect. Don’t leave America under-educated. Help improve colleges and give people what they want, need, and deserve.

Thank you for taking the above into consideration,

high college costs
Published on Jan 21, 2017
Report a problem... When should you flag content? If the user is making personal attacks, using profanity or harassing someone, please flag this content as inappropriate. We encourage different opinions, respectfully presented, as an exercise in free speech.
Lewis Middle School

The public transportation in San Diego is terrible there are people at the trolley and bus stop who wait over an hour just for a ride.

People are starving and don't have food or water.

How diabetes affects the body.

The problem that needs to be stopped.

People including teens should get free school therapy just like how pregnant teens can go to a free clinic without their parents knowing.

Dear Next President, I am a high school student from CA. From my perspective, one of the most important issues in the next presidential election is...

The high cost of college is becoming a major problem to many people.