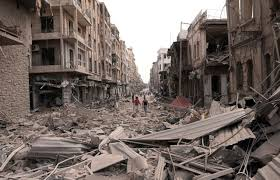 I believe, that soon, we can resolve the Syrian Civil War and it's conflict, before any other conflict arises, but it all start with you Mr.President.Though I may be in no position to tell you or anyone what to do, I can still suggest, and I believe you should put a lot of your interest into the current civil war continuously progressing and becoming more of a problem. As a student, I may not know everything, but I've done my fair share of research and essays on the war. It seems as though wherever I go or look, I am alerted of news on the war, not much of it being too well. So I decided to write about the war, it's effects, in every way, and possible ways to fix it.

Starting in March of the year 2011, this war has still been raging and affecting the whole world. How it started, well a terrorist group known as ISIS has turned against Syria, not that they had any connection with them at all. The different types of attacks cause major destruction to the countries populated areas and how it’s affected the citizens of Syria. Everything from refugees to death count, and even turning countries against one another. Honestly, from the perspective of a young teen, I grow up with a mindset that my country, the United States of America, are the saviors of the world, doing their best to help solve the biggest world problems, but in this case, it seems as though the U.S is only making matters worse.

So far what our government has done to contribute to this war, seems to be very little. Though we have taken in many refugees, which seems to be a major effect of the war, it seems as though we are going against the syrian government. Alone when the U.S joined the cause, it almost created a major controversy between the U.S and Russia. Apart from that, not much else, good or bad, has been done by the U.S.

Apart from the major damages that’ve taken place in Syria, the war has spread its problems to multiple other countries, the U.S included. Once terrorist attacks began taking place, one big problem, the citizens, had to be evacuated immediately, to prevent the death of innocent. Where they went, now that’s where the other countries come into play. Not just has the U.S taken in many refugees, but countries such as Greece and Germany have taken many in too. Another possible, soon to be, problem is our country's relations with other countries. Many times during the war, the U.S has come into conflict with Russia, and if worse comes to worse between the two countries, it’s very possible a nuclear war may erupt, and though it’s very unlikely, when a problem isn’t resolved, it only grows bigger and more difficult to control.

Now, here comes the conclusion, what can we do about this, as a country. To start off, make sure that all countries are working in unison, not against one another. Now comes the step where the plan falls into place, with an unset budget, whether it be high or low, we need troops, and we need not only our troops, but troops from other countries such as Russia and Syria. The troops will be assigned different outpost from the area taking damage to the secured ports to escort the refugees until loaded and sent to another country. Another group of troops, or after a set time assigned for escorting, the soldiers will begin to work on setting outpost where we believe would be/become a better vantage point to keep the terrorist at bay. This would take a very long process, but hopefully become affected, and all of this, to be done without the use of airstrikes or explosions, for these seemed to be the reason of the Country controversy.

With this explained, stated, and even including a possible change to what solution we’re working towards right now. I ask you Mr.President, for you have the power, and are the representation of our country, what will you do to help this cause, and to help change the course of this war?

russia syrian refugees civil war united states of america syria
Published on Dec 15, 2016
Report a problem... When should you flag content? If the user is making personal attacks, using profanity or harassing someone, please flag this content as inappropriate. We encourage different opinions, respectfully presented, as an exercise in free speech.
Lewis Middle School

I think that abortion should be kept legal for several well thought out reasons, mostly for the woman's health.

As the dust settles, more issues are revealed.

This letter to the president will talk about how transgenders do not have enough equal rights and how it is not enforced. Trans people get discrimi...

Child Abuse should be stopped.

Throughout the past 3 years there have been a few of Caucasian police officers killing African Americans. When these events happened the officers d...

These are reasons why abortion should be illegal in the United States.

The Syrian refugee crisis isn't something to joke about- the refugees are just going to keep coming. Will your presidency make the change?

Do Not Let Them In

My letter is about our fear of islamic people and refugees. I believe that we should take in refugees. I also bring up the fact that statistics sho...