Colleges are expensive. The tuition is the most expensive, but there are other things that you need to pay, such as transportation, housing, textbooks, school utensils, and other things. But, that can be put aside, since this letter is going to focus on college tuition.

I did a little research on college tuition and here's what I found. A website from Penn State has records of how much tuition cost in the 1900s. The fee was $150 to $200. The tuition itself cost $36,208. Other colleges are more expensive or cheap, depending on which college you want go to. Another example is UC Berkeley. Their tuition is $13,510 in 2016, which is cheaper than Penn State in 1900s, but still expensive.

My point is that students should go and have an education and pay a minimum price to do so. So Next President, would you want to have future generations thrive and learn a lot at a young age? Or make students pay a lot just to attend college, unlike their elementary, middle, or high school years? 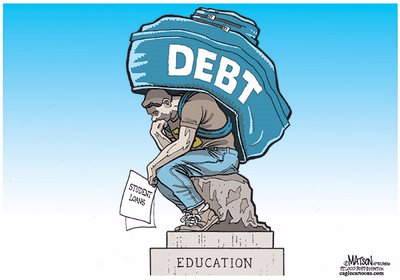 college tuition money education
Published on Nov 9, 2016
Report a problem... When should you flag content? If the user is making personal attacks, using profanity or harassing someone, please flag this content as inappropriate. We encourage different opinions, respectfully presented, as an exercise in free speech.
Santa Clara High School

Racial inequality and police brutality is something the next president should really be concerned with.

There are many pros and cons of having police. Not all police shootings are aimed at African Americans.

This paper is going to talk about college tuition and how it should be cheaper.

Is college for everyone? The education system needs work and people need to speak out and voice their thoughts.

All kid should have a chance at attending school.

Not worth the money

Receiving a higher education is becoming to costly.