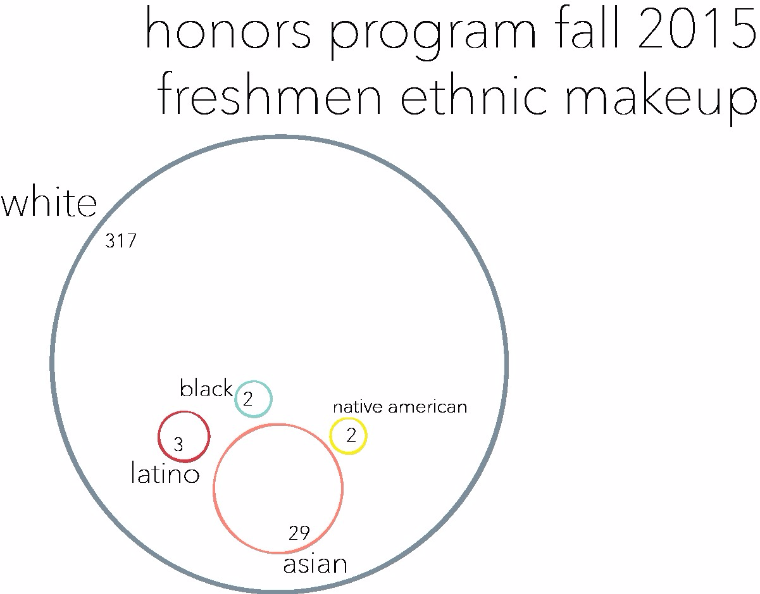 To the next President of the United States:

All around the US minority students are enrolled into honors programs only to be rebuffed by the lack of diversity in classrooms. This is a real problem, in the US, minority students such as students of Native American, Latino, and black descent or race are presenting a frighteningly low number of students enrolled in honors programs. This needs to be recognized as a real problem in the US in order to spread awareness and spur the education system to act. People must come together and recognize this as a true problem in order to change the race gap and equalize education.

One reason why the number of minority students in honors classes is disproportionate is because of the education provided in minority schools. One example of this is when the article, A Lesson in Disparities, cites, “a quarter of high schools with the highest percentage of black and Latino students do not offer Algebra II; a third of these schools do not offer chemistry” (Quinton). This indicates that education system sets up minority students for failure because they don't supply the same classes as in average schools, decreasing their chance of getting into an honors program or a college.

A final reason why there is a lack of diversity in honors classes is because of the discouragement minority students experience in school. Minority students are constantly judged by others based on their race, this judging can be positive and negative but most of the time it's done in a negative and prejudiced manner which discourages a person from succeeding. One instance of this is in the article, Data shows lack of diversity in CSU Honors Program, which a statement from a student who, “...recalled one Honors student being called an “oreo” — black on the outside, white on the inside”.(Hemperly). This indicates that minority students are discouraged from participating in honors classes because they are judged by their own race. The reason this might be so is because there isn't a sizable school/honors ratio of minorities in honors classes, and although it is increasing, students of minority groups participating in honors classes will continue to be judged until that ratio is equal. Furthermore, although all groups are stigmatized for excelling in education / vice versa, it is especially relevant for minority students because they don't have the majority advantage.

education problems minorities education in the usa education
Published on Nov 30, 2016
Report a problem... When should you flag content? If the user is making personal attacks, using profanity or harassing someone, please flag this content as inappropriate. We encourage different opinions, respectfully presented, as an exercise in free speech.
West Seattle High School

Gun control should get stricter to decrease death, and other forms of violence which affect communities negatively.

Abortion is immoral and should be illegal.

To improve the United States, we need a strong education system.

The cost of a higher education is getting out of hand. People today are still struggling to pay their college debt years after graduating. Isn't co...

High School Education is NOT Free

My letter is to inform you that in small town northeast Iowa high school education is not free.

After School Programs for Teens in Middle School

After school programs should be allowed in the USA.