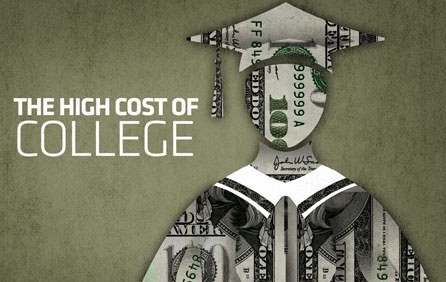 All around the country, college costs have been steadily rising over the years to be nearly three times higher than they were and is much too high for the average American to pay, preventing some students from getting the level of education that they deserve. This is leading some students towards earning less money later in their lives and limiting their options in other ways, one plan to solve this is to increase federal funding by increasing taxes.

The median annual earnings for an average American family in 1974 was around $13,000, a four-year private college would cost around $2,000 a year, and as for public universities, it was only $510 each year. To put these costs in current dollars, it would be $62,000 of earnings each year for families, a private university would be $10,300 per year and a public one would cost $2,500 every year. While the median annual income has risen slightly, to around $64,000, it's not nearly enough to compensate for the soaring college prices. A private university has risen to $31,000 each year, nearly three times as expensive as it would've been in 1974, and prices for a public university have risen to be about four times what they were in 1974, at around $9,000 per year (Davidson).

College costs have been rising too quickly to remain at a manageable price for an average student and their family. The middle class students, who aren't rich enough to pay for the full price of some colleges and aren't poor enough to qualify for financial aid, are being hit the hardest in some cases and are having their college options greatly limited. And if a student's college options are limited, it can mean they'll have fewer options after college as well, making less money. Say that there's two students, both are academic equals, both equally qualified to go to a certain high level college but only one is able to afford it. The other goes to a different school that may still be decent, but still a lesser school. The student who was able to attend that higher level school will make an average of $20,000 more each year than the student who didn't go to that college. So this shows how, by limiting students' college options with high prices, their options for their lives after college and what they're able to do in their lives is also being limited.

One possible plan for dealing with this issue is to increase federal funding for schools, but in order to do this taxes would be raised to support the increased funding (Patton). If schools have increased federal funding then they'll be able to lower college costs without the amount of money available to schools decreasing. The only downside is the increased taxes, which I can understand a number of people not wanting to pay. People who aren't affected by the high costs, whether it be they don't have students in their family looking to attend a slightly more pricey university, or if their family has the money to pay for tuition comfortably, probably won't want to pay the increased taxes because they might not feel the immediate benefits of them. To these people, I'd say that even though they might not be feeling the immediate benefits of the taxes, their payment of them would be making a very large impact in many students lives across the country, both short term, and in the long-run. By paying slightly higher taxes, they'd be broadening the college options to so many students and giving them a better chance to be more successful in their lives. Also, if there is an increased number of students attending these higher level colleges, there will be a higher number of smarter and just generally better prepared people being put out of these schools who will be better prepared to make a difference in the world.

I am convinced that by increasing taxes and decreasing the cost for colleges, that it will greatly benefit many students and produce a higher number of more successful people. I also am convinced that the current prices for colleges are much too high and are a major issue in this country that needs to be taken care of.

Education Costs education
Published on Oct 25, 2016
Report a problem... When should you flag content? If the user is making personal attacks, using profanity or harassing someone, please flag this content as inappropriate. We encourage different opinions, respectfully presented, as an exercise in free speech.
West Seattle High School

National parks are should be preserved for future generations

A letter concerning racial discrimination in the acceptance rate of Asian Americans into colleges and the idea of affirmative action.

Only a positive learning environment and sufficient resources can help achieve the real goal of education.

A college education helps people get better jobs, but the costs are quickly growing and putting students in debt.