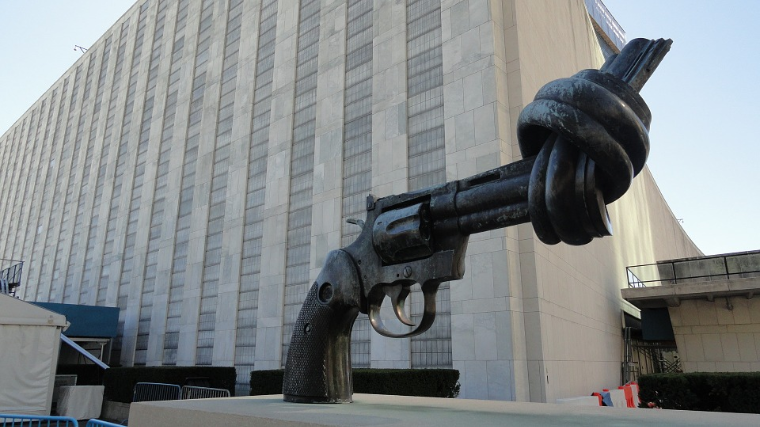 To the next President of the United States.

Take a look around. Our country is being ravaged by shootings, and it seems nothing is being done to prevent it. We argue over trifle matters while people are out in the streets bleeding to death because they just got shot. We don’t have sufficient background checks, and there is no use for military grade weapons in a country like ours. We can have pistols to defend ourselves, but we don’t need to fill a criminal with lead if they break into our house. I propose that we put a ban on military grade weapons, and when people purchase guns or ammunition, we put them through a sufficient, testing background check.

In August alone there were 90 shootings in Chicago. Not only is that around 3 shootings per day, but Chicago has experienced more shootings this year than biggest cities of Los Angeles and New York combined. (Davey). How can this happen in our prideful country? The death toll at this time is 50% higher than it was at this time last year (Davey). With every year, more murders and deaths occur, and soon the United States of America will be no more if we can’t control the shootings. The shootings symbolize how easy of a system to break we have when involved in gun purchases. If people who go and shoot others for fun are getting guns, how can we justify our guns? We should not only check the person purchasing the gun, we should also go down their line of family and check for a history of mental illness. Then, we should have people wait a certain time period to get the gun, so they can’t get it right away. If we don’t take precautions, America will fall apart.

This paragraph is about access to materials that could prove to be hazardous. A few years ago, a kid named John David LaDue from a school in Waseca, Minnesota tried to bomb the school (Drash). He had a thorough plan and had access to lots of materials he shouldn’t have, like ammunition and weapons (Drash). How would he have access to these materials, and how did he become so twisted? I’m not saying videogames are bad, I play a lot myself, but if you start out playing violent games at a young age I think it could affect you in a way similar to this. What the child tried to do is terrifying, but what’s even more frightening is the fact that the kid came way too close to succeeding. If no one had noticed that the kid broke into a storage unit, he could have possibly gotten away with one of the biggest school massacres in U.S. history. When going through background checks I propose we include all close family members and friends, because that's the only way this kid could have gotten access to materials of this sort.

Now we discuss the problem at hand. We are experiencing one of the worst time periods for shootings, yet we still do nothing about them. The U.S. Government is ignoring matters of great importance, and that can't be accepted. If we don't fight for what's right, who will? I was down at the beach at my friends house when we heard a bunch of gunshots. Someone got shot. If it affects us, it can affect you too, no matter who you are. How would you feel if you found out someone who you were close to got injured or killed by a gunshot? Would you then go into action with gun laws? You need to take a stand now and bring to account everyone who has lost loved ones to this horrendous age of shootings. I say that we should have greater police presence throughout the country if possible, and that the charges for these crimes should be raised so that people won't even think about committing them.

I propose that we put a ban on military grade weapons, and when people purchase guns or ammunition, we put them through a sufficient, testing background check. We can start this by all bringing up the issue, and not letting it lie dormant. We need to spread the message. Is the evidence I have shown you enough? If not, you should look into it more. The more you read and search, the more you see and find. It may not be a pleasant subject to talk about, but it's a necessary subject to talk about. I want you to please think about what I've said, and think about the lives that are being lost daily to shootings. Ask yourself if we really need these guns in our community, and how people are managing to bypass the systems we have set up to stop shootings. Don't do it for me. Don't do it for yourself. Do it for everyone. Do it for your country.

background checks gun issues
Published on Nov 9, 2016
Report a problem... When should you flag content? If the user is making personal attacks, using profanity or harassing someone, please flag this content as inappropriate. We encourage different opinions, respectfully presented, as an exercise in free speech.
West Seattle High School

The next president should be sure to try to take more animals off the endangered species list and prevent more animals from joining the list.

The issue of education is important because kids have to have education in order to succeed in the future.

We should care about gun control and don't hurt anyone and make the world safer and less violence.