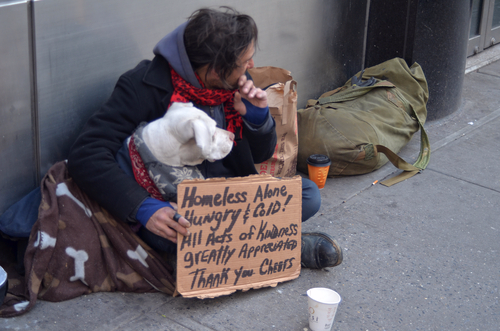 Throughout my life, I have seen some of the poorest areas of Detroit. It brings sadness to my heart that so many in our beautiful land of the free are living without homes and money to survive, whether it be New York, Detroit, Chicago, or any other places across the U.S. When someone sees homeless people with their own eyes, it makes them realize how much they really have. Because of what poverty I have seen, we need to take action as a county to help the people living on the streets start living better lives. With homelessness on the rise in some of our country’s most populated cities, organizations in the U.S. argue that the government needs to step in and improve homeless policies and services.

The number of people living on the streets on any night is astonishingly large. According to the National Alliance to End Homelessness, at the last count, about 564,708 people are experiencing homelessness on any given night in the U.S. Over half a million people are without shelter and or food on any given night. The average homeless person is a middle aged African American man, data shows, with 70.8 % of homeless individuals male. The Alliance shows that about 380,000 of 550,000 unaccompanied young adults are under the age of 18. This shows that over 69% of homeless individuals are under the age of adulthood.

Furthermore, The Alliance says that the main reason people are homeless is because they can’t find affordable housing. According to the HUD (Housing and Urban Development), to be considered “cost burdened”, families or individuals pay more than 30% of their income for housing. Basically, the lack of affordable housing can create a burden on people, keeping them from many other basic necessities such as health care, saving for the future and nutrition. The most common health problems linked to homelessness include mental health issues and substance use, with about 25% having serious mental illnesses, according to The Alliance.

On the road to homelessness prevention, there are many options to look into. To begin, the most obvious, is to create more affordable housing, and create a wider range of housing choices to those who are struggling. The largest federal investment in homeless assistance currently is the McKinney-Vento Homeless Assistance Grants, which will soon be going through some changes because of the HEARTH Act (Homeless Emergency Assistance and Rapid Transition to Housing), The Alliance states. These changes will include incentives for the development of permanent supportive housing and increased emphasis on homeless families with children and prevention. On the topic of homelessness, some actions are being taken , but America needs your continued support to help those in need and make our country a better place.

homelessness hunger Poverty alone
Published on Oct 31, 2016
Report a problem... When should you flag content? If the user is making personal attacks, using profanity or harassing someone, please flag this content as inappropriate. We encourage different opinions, respectfully presented, as an exercise in free speech.
Avondale High School

Student loans should be lowered in order for people to be better financially.

Immigration is a huge problem in the U.S. this is my plan. Control the immigration, do not let people in who seek free entrance in this country, ma...

Why are they getting away with this?

It's time to start supporting the brave people who risk their lives for our country.

The lives of the people in Central America are getting worse everyday, and because of that they migrate here to live a better life, but the U.S gov...

Illegal immigration is hurting the american economy. Illegal immigrants take jobs away from Americans which puts them in poverty.

Why We Should Care About Homeless

There is no reason that we can not help solve poverty and homelessness.

Homelessness is a re-occurring issue in the U.S everyday. Over 600,000 people go without a home everyday. They are left to fend for themselves wi...