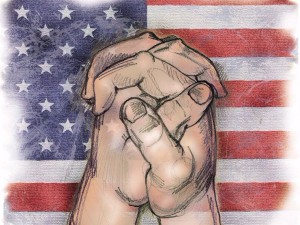 I must admit, you have taken over during a very tricky and difficult time in our country’s history. Racially fueled riots last through the night injuring bystanders and hardworking police officers. The media is praising professional athletes (role models for America’s youth) for kneeling during the country’s national anthem. This recent hatred-fueled election has separated friendships and ruined gatherings––leaving a trace of bitterness and resentment fresh in the minds of many of the public. With threats such like ISIS to our national security, we cannot begin fighting with each other; we need to unite and strengthen each other––not tear each other down. What happened to being “One nation under God”? We are far from being “One nation” with the current standing on several issues: including, racial tensions and police brutality, immense hatred encompassed in the media and everyday life, and the obvious division this country is living in. Where do we go from here? It’s a tough question to ask, and even a tougher question to answer. I am asking you to, as the President of the United States, bring a sense of unity back to the country to truly become “one nation” once again.

In July of 2016, five police officers were shot and killed in Dallas, Texas. These brave men who risked their lives protecting the community they lived in never returned to their families. They never saw their loved ones again. The violent act occurred due to an upset over the police shootings of black Americans that were viewed by some as unreasonable. The recent shooting of local Minnesotan Philando Castile was horrific; he was shot with seemingly no apparent logical reason––a tragic event left thousands heartbroken. While this horrific incident was appalling, we cannot generalize the policemen and women who protect the everyday lives of all of us. Not all policemen and women are racist––just like any profession, ill-minded people make mistakes; the attitude of degrading the police force for racially biased shootings is terrible and needs to be dealt with. According to data compiled by the Washington Post in 2015, 50 percent of the victims of fatal police shootings were white, while 26 percent were black. While there is an overwhelmingly larger amount of whites than blacks, stats from a 2009 study from the Bureau of Justice Statistics show that 62 percent of robberies, 57 percent of murders, and 45 percent of assaults in the 75 biggest counties in the country were committed by blacks. This brings understanding to the previously stated fact that 26 percent of fatal police shootings in 2015 were black citizens. There is a higher percent of whites killed fatally by whites. I do believe (unfortunately) that some of the black American killings were done for racial reasons; but, I do believe those done for truly racial reasons alone are a small percentage. Unacceptable for sure, but belittling the police for is not the solution we’re looking for. Now, taking that into consideration, as a white male I can never truly understand what the black community is going through. I have personally seen horrendous acts of racism before my eyes. I vividly remember my witnessing the first act of racism I had seen. I was five years old at a Menards, and a black man was just asking a simple question to a white worker: “Where can you find light bulbs in the store?” A simple question that the worker obviously knew, the white worker refused to answer––replying, “I have no idea.” Voices raised and tension grew as questions transformed to shouting. Although I haven’t personally seen an act of racism recently that I can remember, this mental image is forever scarred into my brain. Solving the issues of fighting over racism is not a white or black solution. As the President, I ask that you support of policemen and women and encourage protestors to chose to do so peacefully, if at all. A little more love in our lives might cure the hatred ridden of this world.

To conclude, with hatred swelling in our country’s borders with racism tension, disrespectful behavior towards officers and policemen, and negative media exposure filling the minds of civilians around the country, your main focus over the next four years should be to focus on uniting the country again. Remember the pride and patriotism civilians had after the horrific attacks of 9/11? I feel that the pride of living in the United States of America shouldn't just be exposed when something terrible happens; feeling proud that you're an American should be an experience everyone goes through on a daily basis. I’m not exactly sure how or what specific measures you will need to take to make America “one nation” once again––but I believe you have the power to do so.

I wish you the best of luck.

police national unity citizens
Published on Oct 18, 2016
Report a problem... When should you flag content? If the user is making personal attacks, using profanity or harassing someone, please flag this content as inappropriate. We encourage different opinions, respectfully presented, as an exercise in free speech.
Benilde-St. Margaret's School

This letter is concerning the issues of the death penalty

Gun Control is necessary for the United States.

Police Brutality has Gotten out of Hand

Police Brutality has risen in the past decade; whats going on?

Stop and Frisk in New York

I am writing to inform you of issues in our country that I believe should be fixed. It arose in New York City’s Police Department and it involves t...