It’s a culture of indifference towards young men and women living in the United States. It nibbles at your mental health and then progressively swallows your mind whole. It creates an environment of insecurity and vulnerability – always leaving the survivor asking, “why?” Sexual assault on college campuses is not only a prevalent problem in the United States, but an epidemic that isn’t prevalent today without denial and injustice. University administrators must play their role to ensure protection for all students living on college campuses, but most universities turn their backs on mandated duties because they have an agenda to uphold – the impression of a safe and appealing university.

It’s without question that universities across the country are the homes to numerous sexual assaults. At the University of Michigan’s campus alone, an internal survey revealed that over twenty percent of undergraduate students were touched, kissed or penetrated without consent. Along with the University of Michigan, numerous colleges across the country are also dealing with sexual assault. Women and men that build up the courage to reveal to administrators on college campuses the pain and suffering of being sexually assaulted are more often than not brushed off and pushed away. Administrators often blame the women for the amount of alcohol they drank, what they were wearing and even why they were alone – what they fail to do as administrators is protect their students. In 2015, the film The Hunting Ground revealed the names of 55 universities in the U.S. that were under investigation for poor handling with sexual assault allegations on their campuses. This large number of universities in the United States – homes to thousands of young adults from across the world – is horrifying; there needs to be more action from administrators when it comes to dealing with sexual assault.

I think that the biggest problem when it comes to sexual assault on college campuses is not only that colleges brush off key evidence as unworthy in trial, but that when a perpetrator is stated guilty, his consequences are not justified to the severity to his or her crime. When a Stanford University student named Brock Turner went into court with three charges of sexual assault facing more than a decade in a state prison, but he left with an astounding sentence of just six months in a country jail – possibly three months with good behavior. That’s injustice. Men and women that break the law must face the consequences, and in this day in age they aren’t. 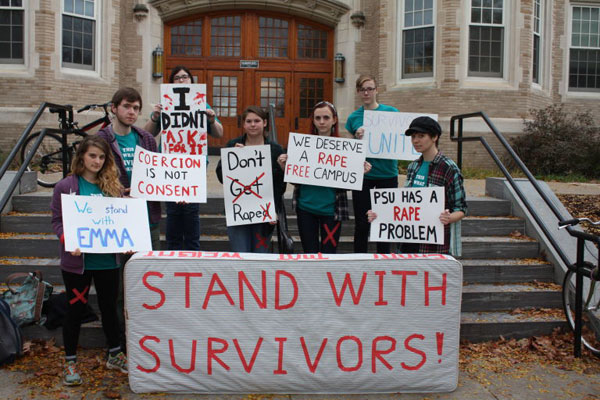 sexual harrasment sexual assault sexual violence college
Published on Oct 19, 2016
Report a problem... When should you flag content? If the user is making personal attacks, using profanity or harassing someone, please flag this content as inappropriate. We encourage different opinions, respectfully presented, as an exercise in free speech.
Benilde-St. Margaret's School

An issue I care about is immigration. I know you want to build this wall along the Mexico border. However, building this wall will possibly make us...

What I believe about the next president.

Michael Lobsenz wants the next president to enforce gun-free zones in schools. Produced by Devin DeAnda and Michael Lobsenz, students of Cedar Ridg...