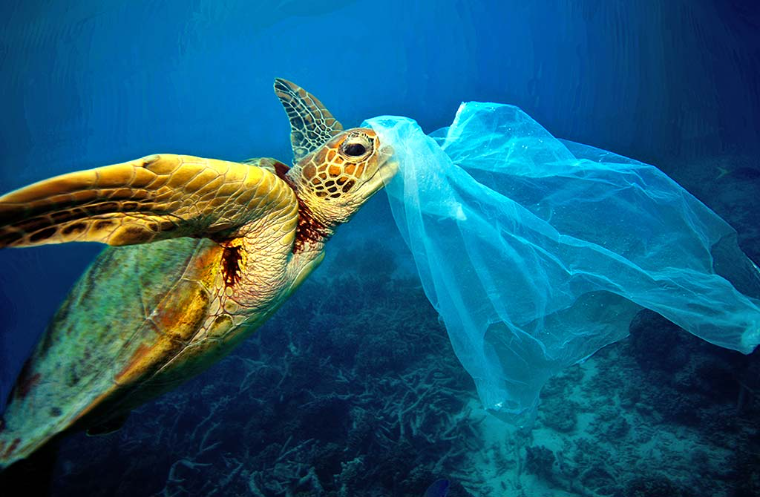 Pollution is slowly but surely destroying our marine life and this issue must be fixed. Something has to be done in order to improve the conditions of life for our marine animals and their environment. Most of the pollution that is occurring in the ocean is based off land activities, which means it comes from us. According to WWF Global, a lot of the waste we produce on land ends up in the ocean and this waste that is invading our oceans include oil, fertilizers, and garbage.

According to WWF Global, oil does a lot of damage to our oceans and marine life. You would think that oil spills account for the damage done to the ocean, but that is not the case. Oil spills are only responsible for about 12% of the damage done by oil. 36% of oil runoff from cities and industries come down drains and rivers. This oil entering our oceans is poisoning the marine life causing them to get sick and even die. It destroys the whole environment around animals which causes them to suffer due to lack of food and shelter from predators.

Along with oil,  according to Sea Turtle Conservancy, fertilizers also cause huge problems for coastal areas. Especially in the area I live in, there are many farms, and fertilizers from these farms runoff into the ocean. These nutrients being put into the ocean causes something called eutrophication. This is a flourishing of algal blooms that depletes the dissolved water in the ocean, and this slowly suffocates the marine life. It has caused numerous dead zones in the oceans of the world that include the Gulf of Mexico and the Baltic Sea.

The last form of pollution I am going to discuss is garbage. Everything that we throw away can potentially end up in the ocean if we do not dispose of it correctly. A big part of this trash that ends up in the ocean is plastic garbage, such as plastic bags, according to EcoWatch and WWF Global. Marine animals often mistake plastic for food, and since plastic decomposes at a very slow rate, it stays in the ocean for a long time. Many scientists have found plastic bags mostly (sometimes other plastic materials) blocking the airways and clogging the stomachs of marine animals. This puts in danger the health of marine animals and their environment. These animals include whales, dolphins, seals, puffins, and turtles. Also, they have found that plastic rings that hold six-packs of drinks often choke animals. Garbage also pollutes coastal habitats and beaches, making it hard to enjoy and use these natural resources.

I personally care about the well-being of our marine life because I am a scuba diver. I have always loved the ocean and the underwater world since I can remember. While traveling to Indonesia this past winter break, I got to scuba dive in this place called Raja Ampat. According to Conde Nast Traveller, Raja Ampat is named for being one of the best places to scuba dive in the world because of it having the most fish and diverse sea life. If you just search Raja Ampat you will be amazed by its beauty and the many things to uncover there. This trip made me care so much more about sea life and made me realize why we need to protect and treasure it because of the beauty it brings to the world. My family and I loved the experience so much that we are going back this upcoming winter break.

"Raja Ampat is the Amazon of the world's reefs." - Conde Nast Traveller

All in all, I care about the issue of marine pollution and you should so something in order to improve it. Some solutions, according to EcoWatch, are adding more garbage cans to beaches which will encourage people to throw away their trash, use natural compost instead of chemical fertilizers,  and to use fewer plastic products in general like getting rid of plastic bags at grocery stores. Also, letting oceans organizations show commercials on TV to show how marine life is being affected by pollution in order to encourage people to change their ways to improve marine life.

As the future president of the United States you need to take charge and address this huge issue of pollution of the oceans and marine ecosystems because we need to save our marine life before it is too late.

pollution ocean pollution environment marine life
Published on Nov 3, 2016
Report a problem... When should you flag content? If the user is making personal attacks, using profanity or harassing someone, please flag this content as inappropriate. We encourage different opinions, respectfully presented, as an exercise in free speech.
Newbury Park High School

My letter is about opening borders to more people.

How is College Tuition Hurting Us?

Reasons to lower the tuition fees.

Are We Safer Without Guns?

Do the facts show that people are safer without others having guns? What are some other options than banning guns?

We need to put an end to gas/oil powered cars.

My goal is to stop global warming and help preserve amazing places like our National Parks in the United States.