One controversial topic that has been circulating through America is abortion. For many people, this is a very sensitive topic due to personal experiences, religious values, or women's rights. In the 1973 Roe vs. Wade case, the issue of abortion was recognized and was legalized to an extent by the United States Supreme Court. Roe vs. Wade prompted a national debate on abortion that has been going on for decades and has separated the nation into being pro-life or pro-choice. States either have abortion fully legalized, legalized to an extent, or want it fully illegalized. In my opinion, the decision to have an abortion or not, should solely be up to the woman.

A question that is commonly ask is, why is abortion so controversial? The answer to this question is complex because there is a wide variety of answers, but it usually gets narrowed down to religious values versus a woman's right to coose. The states who have it fully legalized are categorized as pro-choice and they believe that it is the women and the family’s choice, not the states. On the other side of the spectrum, there are the states who are pro-life and think it is immoral to kill life, even if the fetus is not fully developed. There are also some states who have it legalized, but only in some cases based on the individual’s case.

Another commonly asked question is, why would women want to have an abortion? When the website, abort73.com, asked women to give three reasons on why they chose abortion, 75% said because having a baby would interfere with their life, 50% said because they are having troubles with their significant other or do not want to be a single parent, and 75% they could not afford a child. To some people in the United states, these answers would be sufficient, but for others, these answers would not be good enough to kill off an innocent life.

What would happen if abortion became illegal? I am writing this letter to you because I want you to be aware of the immense ripple effects that would be caused if abortion became illegal. In the United States, almost half of the pregnancies are unplanned and 40% of pregnancies end in abortion. On average, 1.21 million abortions take place in America. Now, imagine 1.21 million women being deprived of this personal choice. Abortion becoming illegal would result in women having unsafe, illegal abortions in the most random of places. This would be putting the women of the United States in danger because they would become desperate and get an abortion done, by someone with little to no experience, thus potentially hurting or killing the woman. I believe that abortion is a public health issue and should be kept legalized.

Since this is such a controversial topic, whatever decision you make will be disliked and even hated by some, but in the end, you have to weigh the pros and cons of pro-life and pro-choice, and figure out what is the best decision for our country. 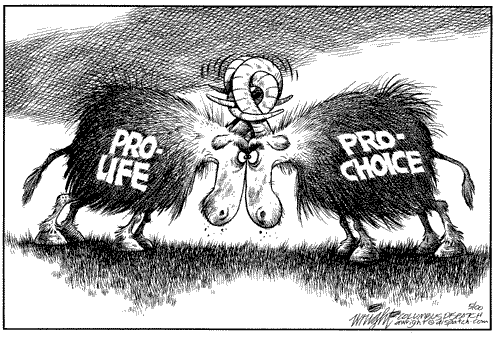 family health abortion women's rights legalization
Published on Nov 3, 2016
Report a problem... When should you flag content? If the user is making personal attacks, using profanity or harassing someone, please flag this content as inappropriate. We encourage different opinions, respectfully presented, as an exercise in free speech.
Newbury Park High School

I think that the president should let illegal immigrants become U.S. citizens.

Aggression combined with nuclear bombs is the ultimate recipe for disaster. The only way to prevent mankind from detonating such a deadly device i...

Breaking Down the Wall

Illegal immigration has become a problem in this country. The Latino and Hispanic communities want to be apart of this country in pursuit of the Am...

Abortion Is Our Choice NOT the States

Abortion is legal in the United States but it should not be monitored or limited by each and every individual state.

Coat Hangers are for your Clothes!

Abortion should be made illegal in the United States.

"We Thy People" Deserve Social Change

Our nation is corrupt and divided. When it comes to social issues, we become even more separated from one another. We are in need of a change that...