The first reason is that it could higher our GDP. That means our country will be even bigger and richer. This means that our country could know help the in this country that are very poor. Another reason a higher GDP could help is that it means it could help our economy demolish old building that are not used and build many more helpful things. Also if we build new building that could mean that there would be more places for people to live.

The second reason we should let immigrants in is that them or their kids could become professions like doctor and lawyer or even own a small business. If we have more people like this it means that there will be more places for people to work in the economy. Some people believe that if we bring in too many Muslims that our country will change into a Muslim country which is not true. There are 5-7 million Muslims in America and our country has not turned into a Muslim country.

In conclusion I would just like to say that we should let immigrants in our country. They would raise our GDP and give us people who can create jobs for others. And if we do let Muslim immigrants in it would not make our country a Muslim one. In the end I hope you stand up for this like I am going to. 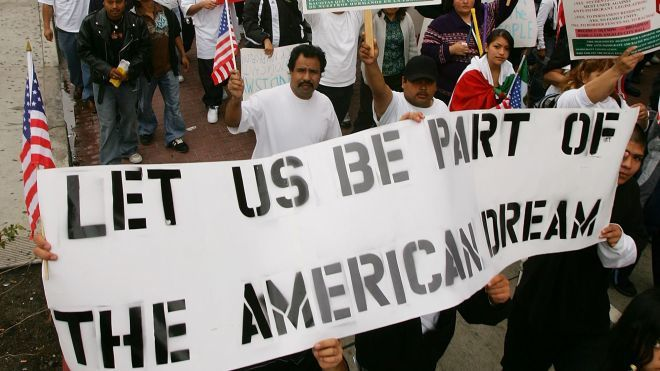 immigration economy muslim americans the people
Published on Oct 27, 2016
Report a problem... When should you flag content? If the user is making personal attacks, using profanity or harassing someone, please flag this content as inappropriate. We encourage different opinions, respectfully presented, as an exercise in free speech.
NoeMiddle6Pacesetters

Should Marriage be illegal?

Marriage is a good thing because people like to get married.

Gun control is not something to be taken lightly. It is a serious issue.

i pick this topic because too many people are dyeing from drugs. You can get addicted to drugs.

Illegal Immigrants Help the Country in Many Ways.

Due to the Central American turmoil the amount of immigrants feeling to the United States is increasing rapidly including youth and children travel...

We need to change this

Raising the minimum wage to 15$/ hour is not only detrimental to the economy and its consumers, but also just is not fair.