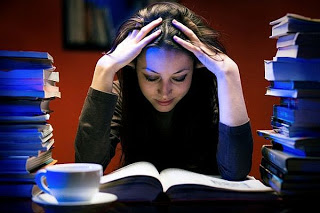 I'm sure you've been through many years of school by now, and are probably not too concerned about it. However, school systems have changed to adapt to the new ideas of the 21st century and now put a lot of pressure on their students.

In a study done by the New York Daily News, researchers anonymously surveyed over 15,000 high school student in the United States. The results they came up with are schocking, to say the least. They show that nearly one in six high school students have seriously considered committing suicide, and one and twelve students have actually attempted suicide. I believe this is because of all the pressure put on us as students.

Teens constantly have a lot of stress put on them. They have to juggle waking up at 6 in the morning to catch the bus, and spending the whole day doing quizzes, tests, or getting homework loaded on them. Most high school students also do extra-curricular activities after school. Wether this be a sport or something to do with the arts, many students don't even get home until 5 or 6 pm. They then have to do all of their homework and study for any quizzes or tests they may have the next day. Teens are expected to do all of this and still maintain a social life, good grades, and, for the older students, a job. This is too much to handle, and I think adults need to acknowledge this. Especially since most adults still consider high school students 'just kids.'

In a different study done by the American Psychological Association, there were 1,018 high school students surveyed and 1,950 adults. More then a quarter (27%) of the teens reported feeling extremely stressed during the school year, while the number went down in the summer to only 13%. They all report that juggling everything such as sports, a job, a social life, schoolwork, and studying is putting a lot of weight on their shoulders and no one knows just how to deal with it.

Another issue with schools is that they take mental illness very lightly. According to Mental Health America’s, at least 20% of teens qualify as clinically depressed, and most teachers and parents just dismiss it, so they never get help. A direct quote from this organization is, "Obviously, depression stems from numerous factors beyond just heightened academic pressures. But they certainly render already painful situations even worse, regardless of whether or not they exist as the root cause."

Another study was done on 804 teachers, and 73% of them considered school and life far more stressful now then it was in past decades. We're in 2016 now. We are the most technologically advanced generation yet. This shouldn't mean America's students are beginning to hate themselves for not being good at school, it should mean that we are using our new technologies to help those who are struggling.

school
Published on Nov 3, 2016
Report a problem... When should you flag content? If the user is making personal attacks, using profanity or harassing someone, please flag this content as inappropriate. We encourage different opinions, respectfully presented, as an exercise in free speech.
Nipmuc High School

Protect and Serve to Obey or Die

The death penalty should be illegal.

We need a change in our education system. It needs to change so we are learning more and can have more time to focus on school.

The Problems with School

There are a lot of different issues with our school districts that need to be changed for the greater health of our students.

Social Media, something so widely used that we forget it can be the doom of us.

A letter that addresses the fight against technology, the war against Generation Z, and the statistics to support a revolution.

This letter talks about what people do to themselves when they get bullied and how bullying could be stopped.