The United States Constitution is a brilliant document that promotes social justice and puts forth an effort to make our country more inclusive. I have so much admiration for the founders of the Constituition, but I think it's time as Americans we acknowledge that the society we are living in today is much different than the one 250 years ago.

The United States has 88.8 guns per 100 people. Which is about 270,000,000 million guns; the most of any country in the world. There are approximately 12,000 men, women, and children dying each year at the barrel of a gun, which is another world topping statistic among developed countries. More gun control laws would reduce the number of deaths in our country. Between 1999 and 2013, 66.6% of all homicides were committed by people with guns. This terrifying statistic should not only serve as a slap-in-the-face to the NRA who promotes gun use for "protection" but also any person who feels that guns should be made easily accessible to families.

Many devoted right-wingers have made the argument that guns should be legal for self-defense. However, many of them are unaware that guns are rarely used for protection. In 2010, there were 230 "justifiable" homicides, in which a victim used a gun to kill a felon. Compared to the 8,275 criminal gun homicides that year, that is 3% of the total murders. Self-defense is so rare, that it shouldn't count as a reason to make guns more accessible.

Buying a gun in America is so easy, it pains me to talk about. In the majority of states, there are many unlicensed gun-sellers who aren't performing background checks on consumers. Not to mention, there are only 13 states that require a full-background check no matter what. In the other 37 states, guns are being sold at gun shows or to private-parties such as an exchange between friends, and no background check is being performed. There is also a loop-hole in the gun sales law that entails private sellers the right to "deliver" a handgun to a person of any age. If you are purchasing a gun from a licensed dealer however, a mandatory background check is required by the National Criminal Background Check System (NICS). This background check is meant to work instantaneously, and there is only nine reasons a person may not be sold a gun. The people who may not be sold a gun may be still be able to obtain the gun if their case is not reviewed by the FBI in three business days. That means that the following people could still find a way to legally possess a fire arm:

Pulse, Sandy Hook, Virginia Tech, San Bernardino, Planned Parenthood Clinic. These towns, universities, night clubs, business', and elementary schools have all fallen victim to gun violence. 27 people, including 20 children, most under 8 died at their elementary school because someone with a mental-illness lived in the same home as somebody with a rifle. Enough is enough. In a 15 year span, the Wall Street Journal collected mass shooting data comparing the US to other developed countries. The results are staggering. The United States of America had 133 shootings from 2000-2015. The next closest country was Germany - which had 6 in that same time span. The Germans, like many European countries have much stricter gun regulations than America. As a country, we need to start rationalizing that having that many massacres in that time frame isn't normal.

It matters because these are brothers, sisters, mothers and fathers alike, having their lives abruptly ended at the hands of someone with a fire arm. It matters because it protects the lives of victims of domestic abuse, children at school, and even our beloved celebrities. We are no longer living in the 1700's, where it took about 2 minutes in between every shot fired with a musket. Innocent people are being stripped of life, many for no reason. So I ask that you take it upon yourself as the Leader of the Free World to repeal the second amendment, and make America a safe and desirable gun-limited place. 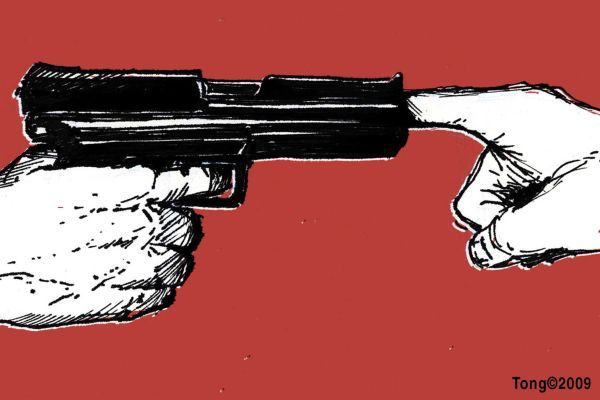 gun issues
Published on Nov 3, 2016
Report a problem... When should you flag content? If the user is making personal attacks, using profanity or harassing someone, please flag this content as inappropriate. We encourage different opinions, respectfully presented, as an exercise in free speech.
Nipmuc High School

How religious discrimination is on the rise in America

This essay is about the development of Cancer and how it needs to be cured.

Guns and the 2nd Amendment have become a controversial topic in our country and we need to figure out how to deal with it before even more people a...

I am writing to you about the issue of gun control laws in the United States.

Gun control in America will never help the whole country.