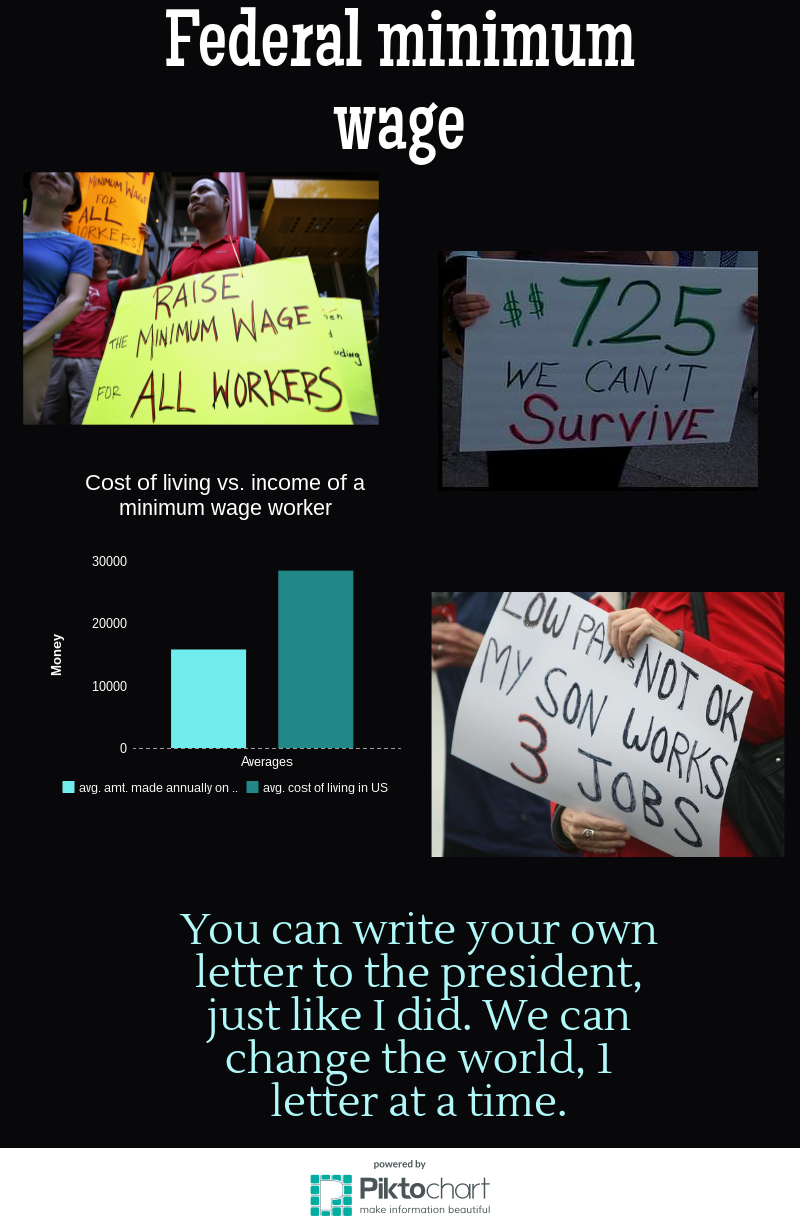 With the numbers of people working and supporting themselves rising, the problem of minimum wage is also rising. People as young as 16 can be impacted by this issue. I am impacted because I am a 17 year old, I have dreams just like any other kid my age. I want to go to college and support myself, but doing that will be extremely hard with a job that only pays minimum wage. The minimum wage needs to be raised because people living on the federal minimum wage are just getting by and getting by is not enough; as it stands, people barely have enough money to support the cost of living in America.

Most kids my age are restaurant servers and with this position comes tips, which are great. However, with this position also comes lower wages. According to Tiffany Koebel, ¨The federal minimum wage for tipped workers is even lower. It’s only $2.13 – and it hasn’t been raised since 1991.¨ This means waitresses are relying on tips as the bulk of their pay. Some restaurants don't get very many customers causing the amount of tips to lower. How can you support yourself, let alone anyone else, on money like that?

Some people may say that those working for minimum wage shouldn't complain and they should go to school to get a degree to better themselves or get a second job. Some people say this because that is what they personally did. Although this is an understandable argument, it isn't that easy. School is expensive and again minimum wage can't support a person with school loans.

What I'm asking you to do, Future President, is to fix this problem affecting millions of Americans. We all have dreams, some bigger than others, but without a raise in minimum wage, we won't be able to achieve them. People need your help, and you can change that. Change this issue and make America a better more enjoyable place to live.

We need to raise the minimum wage because it is not enough to support someone living off of a minimum wage check. This will give people a greater chance to prosper and thrive. Also, we would have fewer homeless and hungry people in the country because of this change. According to Thomas E Perez (the secretary of the US department of Labor), ¨Increasing the federal minimum wage to $10.10 would make a powerful difference in millions of lives. Based on tabulations from the Council of Economic Advisers (CEA), it would benefit 28 million workers, giving them a little bit more breathing room and peace of mind. It would raise incomes for an estimated 12 million people now in poverty, lifting about 2 million of them out of poverty.¨ Thank you, future President, for taking the time out of your busy day to read my letter. I hope you will be able to make a change to this issue.

job market minimum wage debt income inequality money
Published on Nov 7, 2016
Report a problem... When should you flag content? If the user is making personal attacks, using profanity or harassing someone, please flag this content as inappropriate. We encourage different opinions, respectfully presented, as an exercise in free speech.
Oak Hills High School

Gun Laws are in Need for Some Change.

Shootings are constantly being broke out in the U.S. It is time to change that.

African American people are being killed by police and we are looking for ways to stop this .

The minimum wage must be raised to help the economy and lifestyles of Americans.

The current minimum wage is not suitable for the economy.

I would like to tell you some things that need to be fixed in our country and some ways they could be.

Do We Care About Tragedies?

How Teen Suicide Can Be Reduced