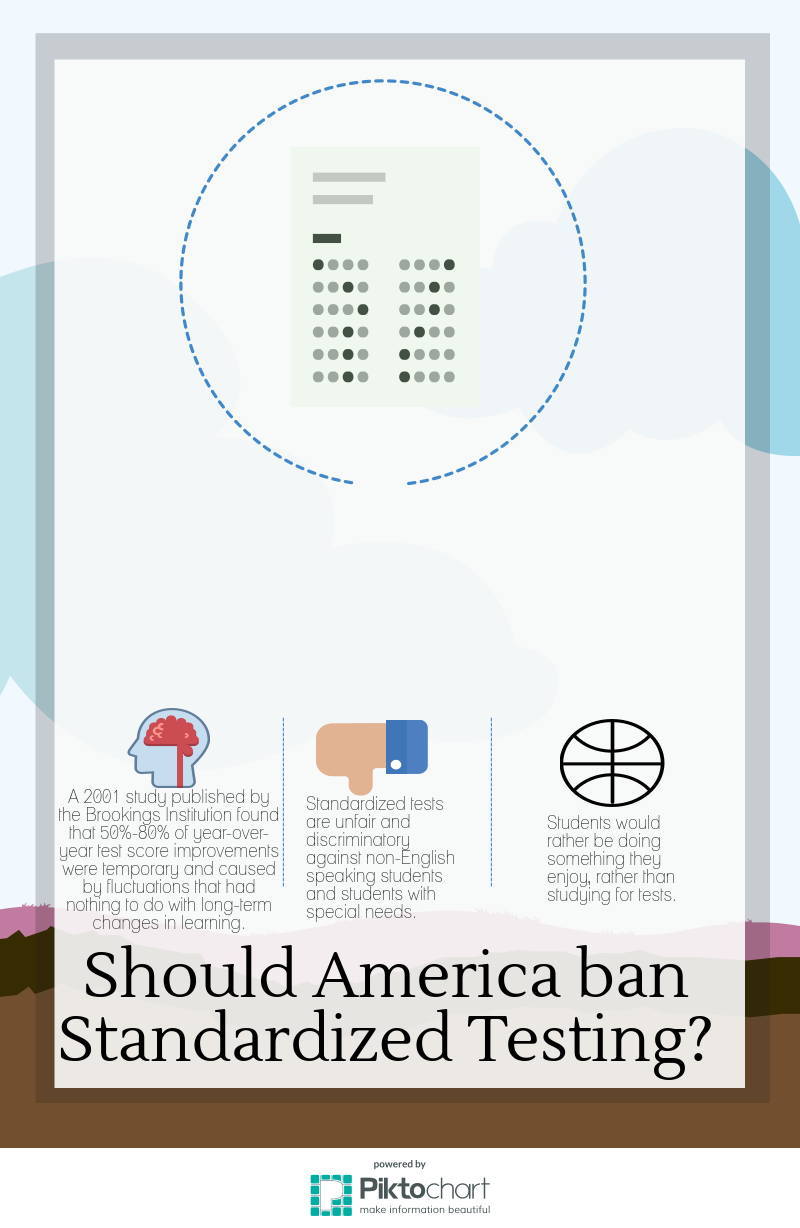 Testing impacts American students highly. It stresses them out. It also defines if they are a good student or not. The students are stressed out due to these standardized tests. It also can sometimes lead to depression, due to lack of doing what they enjoy, rather than studying. As a student, I’ve been stressed a few times myself. I should be out doing things, living a life, not just sitting studying all day.

“A 2001 study published by the Brookings Institution found that 50-80% of year-over-year test score improvements were temporary and caused by fluctuations that had nothing to do with long-term changes in learning…” (“Is the Use of Standardized Tests Improving Education In America?”) This shows the testing has nothing to do with the students learning abilities, instead it has to do with schools making money.

“Standardized tests are unfair and discriminatory against non English speakers and students with special needs.”(Procon,”Is the Use of Standardized Tests Improving Education in America?”) This shows that special needs kids are even being discriminated against with this testing, due to them having to learn a different way than others. Also it discriminates against non- English speaking students, too, because English isn’t their first language.

Some may say that “93% of studies on student testing, including the use of large-scale and high-stakes standardized tests, found a "positive effect" on student achievement.”(”Is the Use of Standardized Tests Improving Education in America?”) Although the counterargument is understandable, I still say it’s wrong, because students are stressed because of this testing. Some are even becoming depressed, due to lack of doing something they enjoy, rather than studying.

Without a doubt, there should be less standardized testing in America. The future President should ban final exams, and the ACTs. If they ban the ACTs, it will cause less stress for college bound students.

In conclusion, there should be less testing in America, because it is stressful and it doesn’t define their knowledge. With less testing, all the kids in America will be able to do whatever they want in their free time, rather than studying. They will also be stress free. I will be stress free. Thank you, future President, for taking time to read my letter.

stress standardized testing testing
Published on Nov 16, 2016
Report a problem... When should you flag content? If the user is making personal attacks, using profanity or harassing someone, please flag this content as inappropriate. We encourage different opinions, respectfully presented, as an exercise in free speech.
Oak Hills High School

The federal and state governments are giving students more tests then they can handle.

Why We Must Repeal Standardized Testing

Persuasive Letter to the next President to repeal standardized testing

Standardized testing does not accurately measure a student's potential and capabilities.

School start times are adding more stress to students lives that they do not need.

Standardized tests are damaging students' childhood and learning, and are causing too much stress.

I think we should end standardized testing for various reasons.