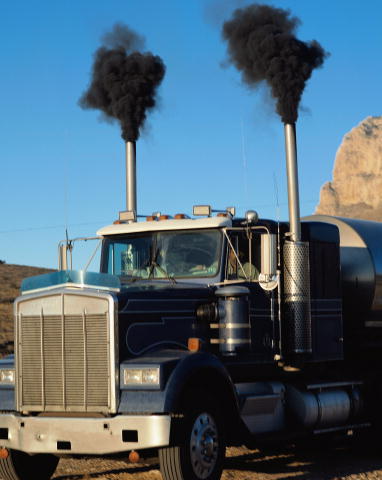 The black clouds are surrounding us, eating the sun’s rays, and drowning us in fear. No one goes into the blackness without a mask or “healthy” air supply. The culprit of this black cloud that lives in our cities is us. We are the ones that run the machines that produce toxic air. Surprisingly they still keep us alive to this day. According to the Union of Concerned Scientists USA (UCSUSA), “Nearly one half of all Americans (an estimated 150 Million) live in areas that don’t meet federal air quality standards.” This leads me to believe that if we don’t change the way we travel, pollution will become a larger and larger problem for health around the world.

It’s hard to believe but, gas powered vehicles are the #1 leader of pollution. According to Health Guidence’s article “Dangers of Exhaust Fumes,” “There probably isn't a person on earth who isn't aware of the fact that carbon monoxide poisoning can kill, and of course the number one source of carbon monoxide is from exhaust fumes.” This means that the number one polluted gas isn’t just “bad” to breathe in, it can kill you. This matters greatly because when the carbon monoxide levels really start to increase the number of people in this world will gradually decrease.

It’s hard to take all in, but research shows that the gas powered vehicles we drive every day are damaging our planet. One way we can fix this is by driving eco-friendly cars that not only don’t pollute the world but, give us better gas mileage. The Union of Concerned scientists USA also mentioned, “This air pollution carries significant risks for human health and the environment. Through clean vehicle and fuel technologies, we can significantly reduce air pollution from our cars and trucks, while cutting projected U.S. oil use in half within the next 20 years.” There is no harm in switching to all eco-friendly cars, less pollution, better gas mileage, and better world. This matters because gas powered vehicles pollute and eco-friendly vehicles don’t.

Some people will disagree and say, “We are doing fine, there is no reason to change what we are doing,” or “We don’t have the technology to make such a dramatic change.” Yes, we are doing fine, but in 10 years no one will be able to go outside without a mask on. If pollution levels ever get this bad we are in big trouble. We have the technology we just aren’t using it the way we should. It is a huge process but, it will work out greatly in the end.

It’s your choice Mr. or Mrs. President, we can live in the black cloud of smoke for the rest of time, or make the change that is needed. Vehicle pollution is always going to hang around, but it can be dramatically reduced. According to BBC News in their article by Jonathan Amos “Nearly 5.5 million people die each year due to pollution and statistics show that it is the fourth highest death cause.” We have the technology and we have the resources, but do we have the mindset? Its up to you.

health earth cars pollution
Published on Nov 4, 2016
Report a problem... When should you flag content? If the user is making personal attacks, using profanity or harassing someone, please flag this content as inappropriate. We encourage different opinions, respectfully presented, as an exercise in free speech.
East Junior High

There are people in need of service dogs and there are thousands of stray dogs roaming the city streets of the United States. Rehabilitating these ...

This is a letter to the next president about how we need to save our environment at all costs.

Our earth is an important resource with which we need to survive. If we expect to live happily in the future we need to take care of it. My letter ...