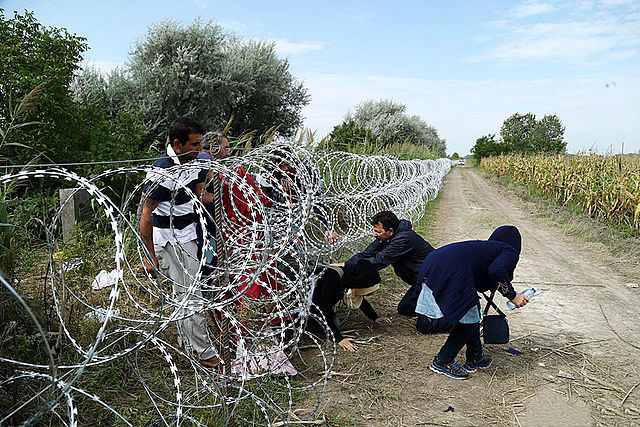 You wouldn’t let a homeless person steal food, so why are we letting immigrants come here illegally? Immigration has gotten out of control in recent years. Its rates have skyrocketed and all we have done is sit back and let it happen. Immigration needs to be controlled and that is where you, future president, come into play. While immigration is okay in moderation and while under control, illegal immigration needs to be brought back under control.

Immigration has gotten out of hand in recent years. According to a study done Roque Planas, the National Reporter of Huffington Post, “To put the current crisis in context, roughly 63,000 unaccompanied minors, most of whom are reportedly fleeing violence and poverty in Central America, have crossed illegally into the United States since October.” Clearly there are a lot of immigrants flooding in at an uncontrollable rate. This specific text is from an out of date article and the rates of unaccompanied minors entering in have since gone down, however this problem is definitely still very serious. Roque Planas also brings to light the reason that is causing the immigration in a lot of places, violence as well as poverty is driving immigrants of Mexico and other countries and into America.

A huge reason so many are easily getting in is because our government seems to refuse to buckle down and fight this problem. According to an article by The Heritage Foundation, “Granting amnesty to the millions of unlawful immigrants in the United States would encourage more illegal immigration. In 1986, Congress granted a mass amnesty to nearly 3 million unlawful immigrants and then failed to deliver on promised improvements in enforcement and border security.” this proves that our government has been making numerous empty promises on this matter and have been turning around and doing exactly the opposite of what has been promised. If we as Americans wish to get anything accomplished, we must implore congress to fulfill their duty to the people and accomplish whats best for the country and its citizens.

According to an article by the Economic Policy Institute (EPI) written by Daniel Costa, David Cooper, and Heidi Shierholz “There were an estimated 11.7 million unauthorized immigrants in the United States as of 2012. Unauthorized immigrants account for about 3.7 percent of the total U.S. population and about 5.2 percent of the labor force.” This shows just how many immigrants really are in our country and how much it is having an impact on our labor force. Many would see this as being a good thing, the larger the labor force the faster our economy can grow. The side of this that is important to realize is that there isn't always as many jobs needed as there are workers available, this means that these immigrants are often taking jobs from Americans.

Although immigrants are flooding in and this is generally viewed as a bad thing, there are people who could argue the exact opposite. Many people will argue that immigrants are benefiting the U.S. economy. An article written by Anup Shah of Global Issues,“Immigrants will often do jobs that people in the host country will not, or cannot do; Migrant workers often work longer hours and for lower salaries, and while that is controversial, sometimes exploitative, it benefits the host country” Someone arguing that immigrants are good for America would say that this shows how they benefit us in doing unwanted, often menial, work. The important side to see of this is the fact that these immigrants are being treated extremely poorly. Although a lot of Americans wouldn't want to do that work, they also cant work for as little pay as immigrants who really have no other choice.

We as Americans need to stop that homeless person from breaking the law, however we don't want to throw them back out onto the street. That is why you need to take the money we are spending on border security and all things to do with immigration, and spend just a fraction of it on stopping immigration at it’s source. You need to make there be no reason that people should need to immigrate. Too many illegal immigrants are getting into our country and you, the next president of the United States of America, could finally be the change that America so desperately needs.

immigration mexicans border security Border Controls immigrants
Published on Nov 8, 2016
Report a problem... When should you flag content? If the user is making personal attacks, using profanity or harassing someone, please flag this content as inappropriate. We encourage different opinions, respectfully presented, as an exercise in free speech.
East Junior High

Matthew and Tan Washington 5 November, 2016 The Next President of the United States The White House 1600 Pennsylvania Avenue NW Washington, D.C...

A teenage view on Immigration

For my american history class, we were assigned to write this letter recommending our plans for immigration, and how our country should deal with i...

Undocumented immigrants are treated unfairly and are not represented in the way they should.

I think that the president should let illegal immigrants became U.S citizens.