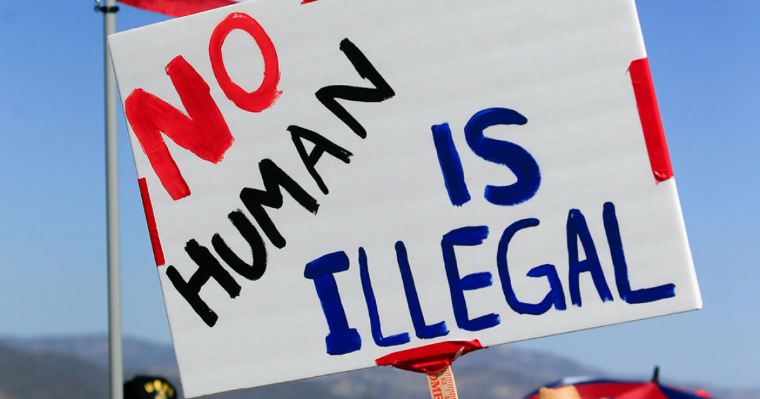 The heartbroken and mournful little girl woke up once again with the strong desire to perceive her mother’s melodious voice calling for her to wake up. She longed to hear her honey-like voice, smell her delicate scent, and see her charming round face once again. She wanted to conserve these memories for as long as she could, but they were starting to slip out of her grasp ever since her mother had been deported for living an illicit dream. The deportation of innocent people, who come to America in search of the American Dream, separates families and creates dents in the communities they form a part of. As a group who heavily contributes to our economy, as well as to our society and culture, illegal immigrants should be granted American citizenship.

Many immigrant families across the United States are being shattered and demolished because of the deportation of their beloved family members, and by their inability to do anything without proper documentation. Families are going through economic struggles when the economic pillars that provide their family with money are deported, leaving the helpless family behind. According to Pew Research Center, the average income of an illegal immigrant family is $36,00, which differs greatly from the $50,000 average yearly income in a U.S.-born residents. (Passel,Cohn.) When the person who sustains the family is deported, the family’s economic struggles only get worse. The other family members are forced into getting jobs in order to continue sustaining the family. If these family members also lack an identification, it becomes harder for them to find a stable job. Most of the jobs that they are allowed to work for are low income jobs that will barely help them make it through. Illegal immigrant families roam around in fear, at the bottom of the society class, because of their lack of documentation which denies them the ability to do anything peacefully. Illegal immigrant families struggle to buy houses, since they do not have proper documentation it becomes impossible for them to receive a bank loan to buy a house. Even if they are doing well economically, they cannot buy a house. A license is also necessary to do many daily life activities, without proper documentation you cannot apply to get one. Many families are forced into driving without a license because they have to go to work, buy groceries, and take their children to school. They do all of this in fear that they could get a ticket simply because they have no way of receiving a license. Deportation and the lack of identification affects immigrant families nationwide.

Immigrants strengthen, assist, and benefit the American economy, as well as our society, in countless aspects. With the massive amounts of immigrant workers in America who receive and send money to and from the U.S., there is more money in circulation. These workers also pay taxes, from which our economy receives additional tax income. The United States of America is in the eyes of many foreigners a dream come true. This country opens up many opportunities and resources that no other country in this world has the luxury to offer. Immigrants promote this American dream that initially founded our nation through their motivation and perseverance to contribute to our society. Through this principle, many workers here conform themselves with any job they can get, this is the reason for the “Expansion of low-cost labor pool,” (Should Government Allow Immigrants to Become US Citizens?”) which majorly benefits our economy. Immigrant benefit our economy and society in various ways.

Illegal immigrants contribute to our country in many different ways and they should be given the resources they need to step out of the shadows of society. We should provide a source of valid identification to illegal immigrants who have children in the U.S., or have lived in the U.S. for a certain period of time. This will help them apply for jobs that will allow them to advance economically. This will also help them get a license so they can do daily activities without the fear of being caught without one. Another option is to legalize illegal immigrants who are parents of U.S. born citizens, or have been in the U.S. for a certain period of time. This will create even more economic revenue, as the lists of jobs that immigrants can apply to becomes considerably longer. This also allows immigrants to make additional investments in things they were unable to invest in before like cars, houses, and businesses.

The joy and contentment of the little girl could easily return to her young face through a warm hug from her cherished mother. The cozy and delicate touch from her is one that can not be imitated by anyone else. Because of deportation, this is an illicit sign of affection that she can no longer receive. Deportation is something that affects innocent people who want nothing else but the American Dream. Illegal immigrants come to the U.S. with their families to form part of a diverse community and to give their children the best education they can receive. To avoid the splitting the families of group who heavily contributes to our economy, as well as to our society and culture, illegal immigrants should be granted American citizenship.

“Should the Government Allow Immigrants Who Are Here Illegally to Become US Citizens?” ProConorg Headlines, 26 Sept. 2016, http://immigration.procon.org/.

immigration deportation civil rights
Published on Oct 19, 2016
Report a problem... When should you flag content? If the user is making personal attacks, using profanity or harassing someone, please flag this content as inappropriate. We encourage different opinions, respectfully presented, as an exercise in free speech.
Orange High School

Illegal or legal, immigrants are part of the future of America. Give us a chance to contribute to the future.

Immigration should be reasonable in order to protect our country.