Political issues is a bad issue we have in the economy. Things like global warming, killer clowns, and also college expenses cost too much. But in my opinion the number 1 issue is illegal immigration. People come all around the world with no authority and just walk right in illegally.

Stated in the illegal Immigration News Discussions RSS illegal immigration is the reason why we have more loss of jobs, more crime, drugs imported, less legal immigrants, and most of all terrorism. Terrorism is a great factor towards illegal immigration because terrorists can come in our country because they can hide in the crowd and act like immigrants because they have no ID to say “i'm an ISIS member” or “I'm a terrorist here to cause mayhem”. And that's how 9/11 happened, the men who flied those planes into the twin towers was at that border and just let right in.

Things like ISIS, homes Destroyed, or just danger is the result of why their is more illegal immigrants that lead to more drugs imported and more crime. As I was saying about ISIS I think they might have destroyed their homes for a reason and they have a plan to make these people look for refuge and that makes a crowd so the terrorist can hide in to get in America.

In my perspective and ideas the best way to control the immigration problem is to take them in 1 by 1 give them an identity check for weapons of sort, make sure he or she is not a terrorist, and make sure they don't have a criminal record and then let them in.

Citation to Picture: By Government Supporting the Idea of Abortions, It Inadvertently Destroyed a Part of Its Own Cash Cow. Aborted Babies Don't Pay Income Tax; Immigrants Will. "The Disingenuous Debate Over Illegal Aliens." Atom. N.p., n.d. Web. 26 Oct. 2016. 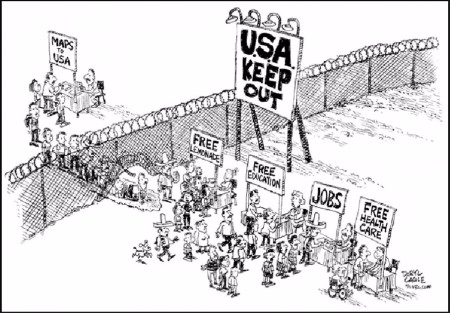 immigration terrorism
Published on Oct 27, 2016
Report a problem... When should you flag content? If the user is making personal attacks, using profanity or harassing someone, please flag this content as inappropriate. We encourage different opinions, respectfully presented, as an exercise in free speech.
Kannapolis Middle School

Terrorism and its Affects on Us.

My claims against terrorism, obviously :p

The immigrant population deserves to live a quality of life that is equal to ours. Meaning they should have the same opportunities we have in the U...

America needs to focus more on the terrorism happening inside our country rather than letting it hide in the shadows of international terrorism.

Torture has a place in the fight against terrorism

The CIA started interrogating people as to gain information that could save lives. They should be allowed to interrogate terrorists so we can be on...