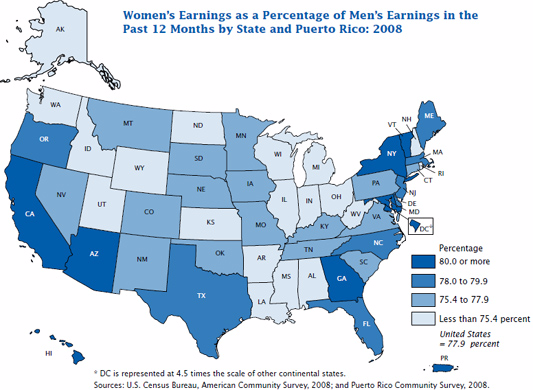 In the U.S. alone, men earn about 21% more than woman do when working the same job, according to aauw.org. To put this into perspective, for every $100 that a man earns, a woman only earns $79. This difference in income between genders is constantly growing and it needs to stop. The gender wage gap is a serious problem that has been going on for years.

Women aren’t getting the equal opportunities that men are in businesses. Business owners have been giving men the raises and higher job placement than they give women for quite a while. According to the Harvard Business Review, women are more likely to get mentoring and are less likely to get the higher-level jobs than men are. Most of the time, the mentoring that they give women is less effective and taken less seriously than the mentoring given to men. Some people might say that everybody is getting equal opportunities and that we shouldn’t look upon men having higher-level jobs than women because they deserve it more. If this is true, then why are men earning 15% more promotions than highly qualified women are, according to The Harvard Business Review.

Another issue within businesses is that men and women working the same job aren’t getting paid the same. Remember, women working full time in the U.S. were paid 79% of what men were paid in 2014. How does it make sense that two people working the same job for the same place aren’t making the same amount of money just because they are different genders? The Business Insider believes that the gender wage gap is “a total sham.” If this problem is a total sham, then why are so many people talking about it and bringing it to attention. If this is true, why is the gap between women's and men’s wages rising day to day? Are all of these people just making these things up?

I would like to bring one last problem to attention, the difference in retirement income between the different genders. Women ages 75 and older are almost twice as likely to live in poverty because of how much they get paid. This doubles the amount of women who are in poverty vs. how many men are currently in poverty. Because of the gender wage gap, more women are going into poverty, which causes the poverty levels to start rising, which creates a whole other issue that could be another conversation for another day. You might say that we need to start focusing on how men are being discriminated in businesses, not women. The issue with this is that men aren’t earning 44% less retirement income than the other gender, women are. Men don’t have substantially fewer career earnings because of their retirement income, women do. All of these issues regard women as lower on the totem pole, not men.

Overall, I believe that the gender wage gap is a serious problem all over the U.S. and it needs to stop. Women aren’t getting the equal opportunities in businesses that men are, women and men working the same job aren’t getting the same salaries, and there is a big difference in retirement income between men and women. In the United States, we strive to make everybody feel like their equal because we believe that they are. All that I am asking is for you, the future President of the United States to bring this issue to attention and give it the respect that it deserves. This is an issue that has been going on long enough, it is time for it to come to an end.

wage gap gender equality equality
Published on Oct 7, 2016
Report a problem... When should you flag content? If the user is making personal attacks, using profanity or harassing someone, please flag this content as inappropriate. We encourage different opinions, respectfully presented, as an exercise in free speech.
Weddington Middle

Changing thoughts about girls in society.

Society has changed the way girls see and think of themselves and it has become a huge problem everywhere.