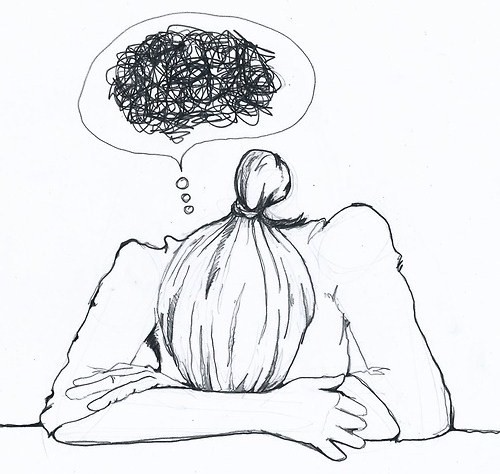 Our brains are a huge part when it comes to anxiety. We know that many diseases and disorders have a genetic component, therefore it should come as no surprise that psychiatric disorders are believed to have a genetic component as well. At birth, it can be easy to tell if a baby is sensitive to stimulation and stress. If a baby has reactions such as crying on a sudden outburst, it is thought that when they grow up, they have a greater risk for developing anxiety disorders. Anxiety develops for a reason. It does not come out of nowhere. There are three major factors which cause anxiety to develop. Genetics, parenting, and traumatic events. Anxiety usually develops because of a combination of causes rather than just one.

Although anxiety is a completely normal reaction to stress, it can be a lot more serious for some people. For example, anxiety can be connected to helpful reactions, and it can show signs of determination, copage, or high focus, but an excessive amount of this can develop into something bigger. Anxiety disorders affect approximately forty million American adults ages eighteen and older in a single year, causing them to be filled with negative emotions, fear being only one of them. There are different types of anxiety disorders, a few being: generalized anxiety disorder (GAD), obsessive-compulsive disorder (OCD), phobias, panic disorder, post-traumatic stress disorder (PTSD), and social phobia also known as social anxiety disorders. Many other types of anxiety go unseen and usually mistaken for one of the six major types.

Imagine you were in my shoes, a person with anxiety, and think it over a little bit. I’m sitting in a room with most of my family and the story I’m telling is taking longer than I expected. I never would have started it if I knew it would take this long. Why is she pulling out her phone? Is he yawning because of me? Is she getting up because she needs to go to the bathroom or because she can’t listen to me ramble any longer? If I stop now, the story won’t have an ending but if I don’t stop, I’ll be talking to myself. Why did I open my mouth at all? I was shaking, a bit nauseous, and my eyes were clouded, making me unable to see clearly. It may seem like such a simple situation and I shouldn't have reacted the way I did, but there's far more to it. The overall feeling is terrible, and even though nobody should have to go through it, there are some things you can’t stop from happening. However, this is a part of me and I must accept that. Same goes for other mental illnesses; you just can’t help it. It’s not like I’m trying to scare it away, that is far from the reason to my letter.

“Every day in my mind is a high speed car that doesn’t have brakes.” (The Mighty) What I think they mean, is that brains of people with anxiety are always thinking about something, usually more than one thing at once, I would know. There aren’t brakes, so when we crash into something, there’s that very short pause and then we’re off once again. It’s seemingly never ending, but adaptable.

A lot of the time, people like me worry more than most, leading us to question every little thing. We are plagued by a constant state of worry, fear, and dread, even when others see nothing to stress about. Over time, these negative emotions are able to dominate one’s mind, interfering with daily functioning, including school, social activities, and relationships. According to WebMD, many chronic worriers tell of feeling a sense of impending doom or unrealistic fears that only increase their worries. Ultra-sensitive to their environment and to the criticism of others, excessive worriers may see anything -- and anyone -- as a potential threat. In some cases, a person’s uneasiness can get out of hand quickly, which is why I am proposing a solution.

Almost everyone is or should be fully aware that the head of the country, the President, has quite a bit of power. The President is able to persuade the public with a simple idea, or, hopefully, build off of the topic a little by changing something. Bottom line, someone with a large enough voice, that a community will listen to, needs to bring awareness about severe issues that are affecting more and more people by the day. As for adding on more to the situation, we can join forces, us local folk and others of high status, and start something as simple as an awareness group with a variety of people. Those who have experienced and dealt with some form of anxiety will be able to inform others who have never encountered it before. I want you to think about it.

We are not “crazy.” We have disorders. We are people.

disorder anxiety
Published on Jan 21, 2017
Report a problem... When should you flag content? If the user is making personal attacks, using profanity or harassing someone, please flag this content as inappropriate. We encourage different opinions, respectfully presented, as an exercise in free speech.
Lewis Middle School

Homework is always stressing kids out and i want to put a stop to it.

As the dust settles, more issues are revealed.

Something so important our lives would be ruined without, has its own price tag, health.

suicide in the world

lots of kids in middle and high school are commiting suicide

These people strike fear into the American people, and they’re not part of ISIS.

My letter is to the President of the U.S about immigration. I think that illegal immigrants are fine and America needs them. They are the people wh...

Lets Find a Cure for Cancer

20,000 people die every day from cancer. This includes men, women and children who should or could be saved if we could just find a cure.

A lack of job employment has grown to be a problem through the years. And continues to be one, as less and less people have the opportunity to obta...

Cyberbullying is a big problem in the world. It can cause people to fall in depression, anxiety and even commit suicide, and this needs to stop.

The Truth About Teenagers

What it's like to live in society today, trying to keep up with all of the standards we're forced to fit to.

A fetus is a human not a mistake.

Cost of Having a Mental Illness

Dear President, What's the real cost of having a mental illness?