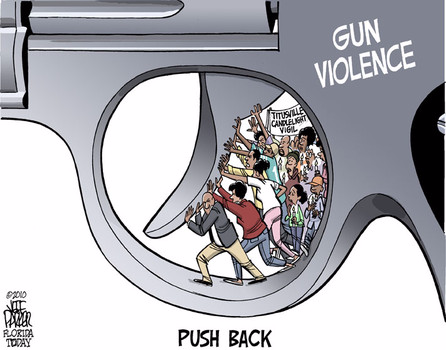 Gun violence is a big problem in the United States, that is clearly proven, because there are more people being killed by each other than there are being killed overseas and by terrorist attacks. In 2016, 40,348 people have been killed or injured by gun attacks, only 179 have been killed or injured due to terrorism in the United States (Gun Violence Archive). There is no reason that we should be killing each other and it shouldn't be acceptable either. I think that part of why people are killing each other is that they think the penalties aren’t severe enough. With that said, gun violence is the biggest problem facing today's world.

Gun violence should be looked upon very seriously because it is a very dangerous type of violence. Murdering someone should be looked more harshly upon than crimes like selling drugs. Murdering someone is ending someone's life, taking something away from all that person’s friends and families, selling drugs is just illegal. You have a higher chance of dying from a gunshot then from taking drugs.

The penalty for gun violence/ murder should be raised to influence a person’s decision on pulling the trigger. If you sentenced whoever shot another person with the death penalty, people wouldn’t take their chances with it. Right now most people are getting a charge of some amount of years in prison to life in prison. They think that their odds are good and think that the murder charges are going to be worth killing someone else.

If your argument is to ban guns, what is that going to do, only allow bad people to have them. Drugs are illegal, people still have them and sell them. Saying that “guns kill people” is like saying “spoons make people fat.” People kill people, don’t blame it on what they use to kill each other with. In 2011 there were 323 murders committed with a rifle and there 496 murders committed with a hammer/club (Hammers, Clubs kill more people than RIfles). If you are going to ban gun shops are you going to ban whoever sells hammers too.

I think that a solution for the problem is that the penalties for attempted murder and people with murder charges should be raised. Many people haven’t been receiving the death penalty lately but, if everyone who murdered another human being got the death penalty, I am sure that the number of murders and shootings would go down. I personally think that banning guns as a solution, is just an irrational decision, many people have guns and don’t make bad decisions, so they shouldn’t be penalized for people that make bad decisions.

Gun violence is like picking out what to eat for dinner, it is a hard subiect to discuss between people. Different people will have different opinions on what the solution to the problem should be. Some people say ban guns, and some people say stronger penalties. Everyone has their own opinion and they are entitled to that.

Published on Oct 23, 2016
Report a problem... When should you flag content? If the user is making personal attacks, using profanity or harassing someone, please flag this content as inappropriate. We encourage different opinions, respectfully presented, as an exercise in free speech.
Orange High School