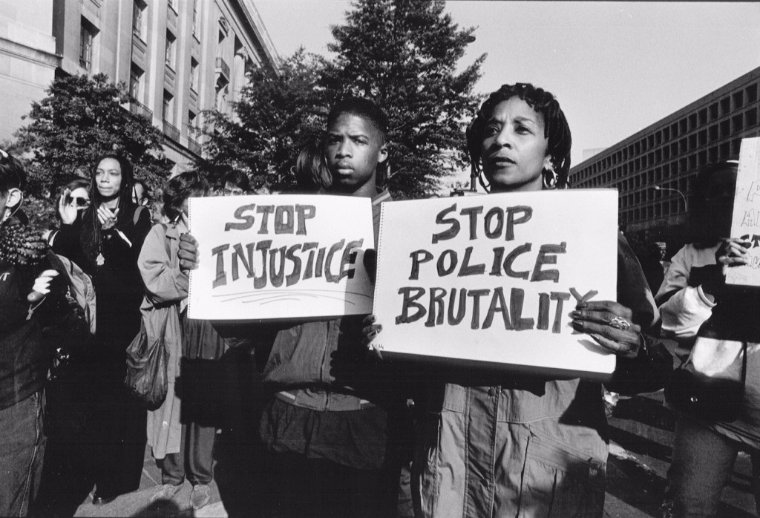 Keith Lamont Scott sat in his SUV in Charlotte, North Carolina, reading his novel, while waiting for his son to come home from school. What happened after that is irresolute. Some say Scott exited the vehicle unarmed only to walk backward in retreat, and get shot four times by the Colt .380 Mustang of a police officer. Others claim that the police shot because Scott exited the SUV holding a gun and refusing to put it down when told to do so. However, we do know a couple things for certain. Keith Lamont Scott is dead, and Charlotte, North Carolina is declared under a state of emergency because of violent protest. Police brutality throughout the nation is a growing issue that the next President of the United States, you, needs to confront and solve.

The issue has become even more concerning because racism has entered the picture. Racism leads witnesses to be more emotionally involved in the events, making the issues more chaotic. Society is noticing more episodes of brutality towards African-American black men than anyone else. According to http://mappingpoliceviolence.org/unarmed/, at least 102 unarmed black people were killed by the police force in the year of 2015(“Police Killed More than 100 Unarmed Black People”). African-American youths are seeing these events occurring while they are growing up. This means that their opinions will form at a young age, and get stronger as they get older. Danielle Douez agrees when she writes, “Think of how youth of color everywhere may identify with these events, based on the ages and races of the victims... we need to protect our children from being the indirect victims of these events as well”(Douez). When younger generations involve themselves in the issue, that foreshadows the worsening of the issue as the younger generations age.

The citizens of the United States are greatly impacted by how the media interprets and presents different brutality occurrences. There is obvious, excessive bias within different media reports; citizens are only going to see part of the story depending on what they read. It has become common today to dismiss the fact that “The media knows that the American public are mostly sheep which will react predictably to certain types of stories. They realize that the most sensational they can make a story, the more people will buy or watch their product”(Randall). The media continues to spate the general public with the most egregious events, knowing how they will react. Media is to blame for the inflation of the issue. The unclearness and lacking of telling the whole story brings a different question into citizens’ minds: why is the government hiding things from us? While informing readers in more detail about the Scott case, CNN states “The videos don't clearly show whether Scott was armed. And critics have also homed in on one key detail missing from the beginning of body camera video released by police: sound”(Sholchet, and Sandoval.) People reading about the situation are concerned by the absence of clarity in the report. The violent protests in reaction to all of the police brutality is presenting a completely different problem for the police to encounter/handle.

Some people believe that police are only human; they will make mistakes and are under an excessive amount of pressure to be perfect at what they do. They think that the skills perfected in training are likely to rapidly degrade when presented with chaotic and stressful situations. If the police are not doing their jobs, and their training does not prepare them properly to handle the situations presented to them, then the training programs should change or they should not be police officer at all. This applies to the ability to handle stress as well; officers know what they are signing up for when they join the force. Additionally, the government created the program that determined when an officer in training is ready to step out on his own. Officers chose the occupation involving an immense amount of pressure, and the increased frequency of mistakes is not caused by imperfection.

In order to begin the alleviation process of this issue, communities need to interact with their officers to see them as people instead of police. The government also has the capability of stepping in and creating more laws to keep better tabs on the problem/police force. Creating community programs that make the police force interact with the members of their community in order to not always be seen as the bad guy. The Michael Buczek Little League is a program that has helped transform the violence-stricken area of Washington Heights, New York City, into a safer community environment. If other communities struggling with presenting beneficial relationships between its officers and its community members, creating programs such as this could be a possible solution. The families involved in the community program, which works with volunteering officers, can begin to get to know and look up to the police. Thus, the amounts of supposed “excessive pressure” and stress on them will decrease.

The government has the power to step in and create laws to forcefully work toward a better future/elimination of the problem. J.B. Wogan, of www.governing.com, observes that “Both Colorado and Maryland have enacted laws requiring police departments and sheriff’s offices to report every officer-involved death to a state agency”(Wogan). This is only 2 states of 50 participating in attempt to control the issue. If the other 48 states would like to take action as well, maybe the country could begin working toward the goal of less violence as a whole rather than in fragments. Lawmakers are starting to support the idea of creating laws pertaining to the increase in use of body cams on police officers. However, the beginning of the support means that it will take a while to form the laws while the issue in continuously growing at the same time.

Keith Lamont Scott is dead. So are 102 unarmed black men last year. Protests have intensified. Police brutality is one of the biggest issues facing the United States today, and without the confrontation of next President of the United States, this problem will continue to prevail.

police brutality police corruption Racism police black lives matter
Published on Oct 19, 2016
Report a problem... When should you flag content? If the user is making personal attacks, using profanity or harassing someone, please flag this content as inappropriate. We encourage different opinions, respectfully presented, as an exercise in free speech.
Orange High School

A little more information on how the organization started and why it is important.

I think police officers should be forced to have more education

This is a letter to the next president.

As president, I hope you can make reforms to the growing discrimination in America . Also, please reevaluate the gun laws we have due to how access...